NEW YORK — Mets third baseman Todd Frazier made a lot of new friends before tonight’s game, one played in the backdrop of remembering the bravery and sacrifice involved in one of the most seminal moments in American history. His performance during the game surely netted Frazier a few more new friends during this latest Mets surge.

Frazier and Jeff McNeil each hit two home runs to lead the Mets’ offense in a 9-0 rout of the Arizona Diamondbacks, New York’s third straight victory. The Mets hit five home runs total on the night, with four of them — including McNeil’s two clouts — coming on the first pitch.

New York is now 2.5 games back of the Chicago Cubs, who play later in the evening in San Diego, for the second Wild Card spot.

Before tonight’s game, played on the 18th anniversary of the terror attacks of 9-11, many of New York City’s first responders were honored as they walked onto the playing surface during a pre-game ceremony. Some of the responders stood along the first and third-base lines shoulder-to-shoulder with members of both teams, including Frazier, whose two-run homer with two outs in the first gave the Mets a 4-0 lead.

Before and during the ceremony, Frazier got the opportunity to get to know some of the people in uniform before putting on a performance in front of them afterward.

“It’s a lot of fun [to play well], especially today on 9-11, when you think of everybody and the troops,” Frazier said. “I made a bunch of new friends today, police officers, firefighters. They gave me a lot of pins and coins. That stuff goes a long way.”

Nimmo followed Frazier’s first home run with a solo shot of his own on the first pitch he saw from Diamondbacks starter Robbie Ray to complete a five-run fifth inning for New York.

One inning later, McNeil crushed the first pitch he saw from reliever Taylor Clarke.into the second deck in right field for a 6-0 lead. Clarke also gave up Frazier’s second home run in the third, an opposite field shot over the right-centerfield wall to open up seven-run lead.

The Mets barrage was all in support of Steven Matz, who, given his form at home this season, needed only one of those homers to feel comfortable in giving New York a quality start. Matz went six shutout innings while allowing just four hits and striking out seven, lowering his home ERA to 1.94 and winning six of his seven decisions at Citi Field.

Matz’s only spot of bother came immediately after New York’s five-run first, as Matz walked the first three batters to load the bases. From there, Matz struck out catcher Carson Kelly before inducing a 5-3 double play off the bat of pinch hitter Kevin Cron to end the threat.

McNeil added his second home run in the sixth, a two-run second-deck shot on a first pitch, to provide the game’s final scoring.

Ray, who was removed from his last start after 4.1 innings due to a blister on his middle finger on his left (pitching) hand, did not get out of the first inning, allowing five hits and five earned runs in two-thirds of an inning, his shortest start in his big league career. 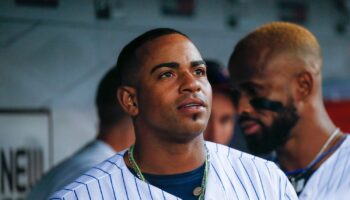