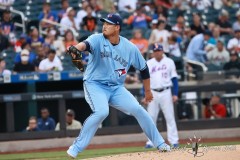 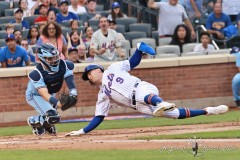 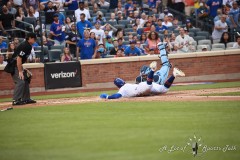 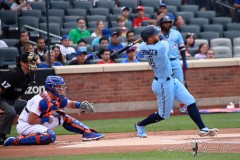 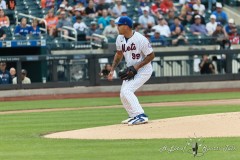 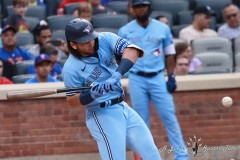 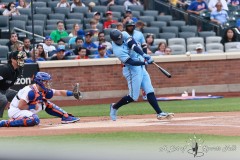 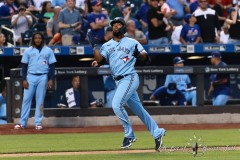 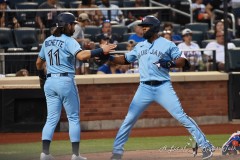 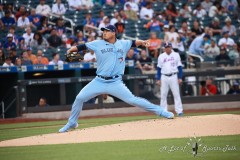 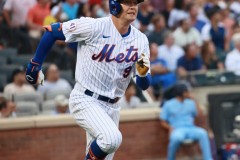 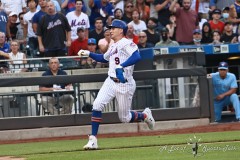 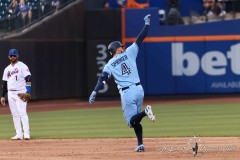 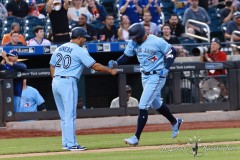 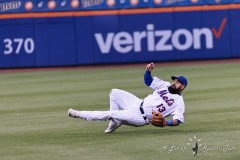 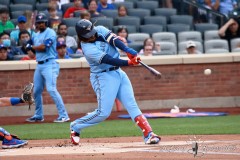 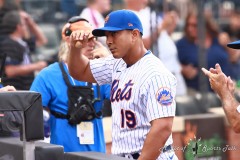 NEW YORK — If the Toronto Blue Jays offense, the most powerful in the game of baseball so far this season, needed any more juice to send the team over the top in their pursuit of a playoff spot this season, they might have gotten just from George Springer’s long-awaited appearance at the very top of the lethal lineup.

Batting leadoff for the first time this season, Springer opened the game’s scoring with a third-inning solo home run and capped off the frame with a spectacular diving catch in left-center field, helping to jumpstart Toronto in its 10-3 victory over the New York Mets on Saturday night at Citi Field. The Blue Jays added to their Major League-leading home run total, now standing at 149, with five home runs on the evening, as Teoscar Hernández slammed two dingers while Marcus Semien and Bo Bichette also went deep.

One of the prized acquisitions in the offseason after signing a 6-year, $150 million deal, Springer’s debut campaign with the Jays has been checkered by injury, starting the season on the IL with a left oblique strain — one of two stints this season on the IL — and appearing in just 26 games before tonight. The 2017 World Series MVP excelled most at the plate during his time with the Houston Astros from the leadoff spot, and the Blue Jays decided to put Springer in his familiar hitting role after they were shut out for just the second time this season in Friday’s loss in New York.

Ten runs and 17 hits later, the Blue Jays may have hit on something with Springer at the top of the order.

“I just think my mentality, the game, it’s all the same. But I just think I’m kind of able to attack a little bit in a different way [when hitting leadoff],” said Springer, who is batting .333 (9-for-27) with three home runs and a 1.061 OPS in his last seven games. “It’s something I’ve done my whole career. I know how to do it, and it felt good.”

Despite sporting what appears to be the most-feared lineup in the sport, the Blue Jays still remain on the fringes of playoff relevance; After tonight, Toronto is 8.5 games behind Boston for first in the AL East and four games behind Oakland for the second Wild Card spot. With the trade deadline less than a week away, the biggest jolt to Toronto’s playoff push may very well come in house, a move that was contemplated for a while by the Blue Jays’ brass before being decided upon officially before tonight’s matchup.

“I’m thinking about it the whole time and the coaches were thinking about it the whole time and we have to communicate with our players,” Blue Jays manager Charlie Montoyo said about reordering the lineup and putting Springer in the leadoff spot. “I just felt it was the time. We talked to all of them before we made the adjustment, and they had a great game.”

Springer’s continued presence in the lineup also helps the Blue Jays’ defense, and in the bottom of the third, Springer made a wonderful diving catch on the warning track off a line drive by Brandon Nimmo. Heading towards the wall and with the ball slicing away from him in the left-center field gap, Springer went airborne and stretched almost parallel to the ground as he made a backhand catch, easily one of the best defensive plays in the Majors this season.

“That’s probably my favorite [catch],” Springer said when asked where that would rank among his best catches in his career. “I could kind of tell that I was getting close to it. I knew the wall was close, too, but I was committed to getting it and was glad I could get there.”