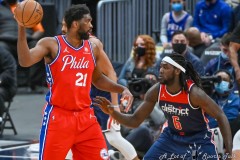 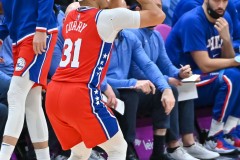 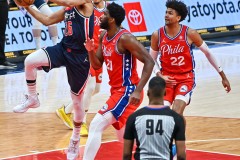 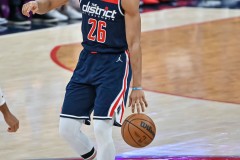 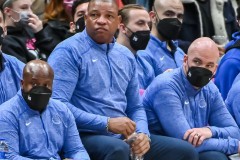 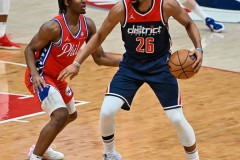 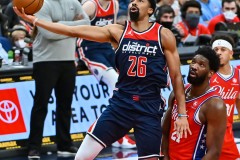 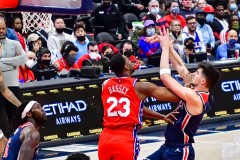 Embiid scored 36 points and grabbed 13 rebounds, getting into a tussle with Montrezl Harrell in the process that led to the latter’s ejection, as the Sixers defeated the Washington Wizards 117-96 at Capital One Arena on Sunday evening. Tobias Harris added 23 points and Furkan Korkmaz chipped in with 14 points off the bench as Philadelphia won its sixth straight game in the series.

Philadelphia used a 38-point second quarter to turn a six-point first quarter deficit into 63-55 halftime lead, and Embiid helped to extend the lead in the third quarter to over 20 points with 11 third-quarter points. On two separate occasions late in the quarter, Embiid and Harrell jawed at each other, with a blocking foul on an Embiid drive resulting in a shoving match between the two and a double technical foul with 3″04 left in the quarter. Two possessions later, Embiid finished an and-1 by yelling toward Harrell, who then shoved Embiid once again and, subsequently, was ejected for receiving his second technical foul. Embiid was seen waving Harrell goodbye as the second technical was assessed.

“I wouldn’t say I baited him into that,” Embiid said after the game. “I’d like to think I’m a troll.”

“That’s sports right now,” Sixers head coach Doc Rivers said. “Be prepared. Be ready. I always think it’s the other guys, the guys who are there who aren’t sick, who can play, the more prepared they are, the easier they make it for the newcomers.”

The Wizards, who were without leading scorer Bradley Beal, Kentavious Caldwell-Pope and Raul Neto, all of whom are in the health and safety protocol, saw their two game winning streak end as they returned to play their first home game since December 11. Spencer Dinwiddie led the team with 17 points while Harrell scored 15 points in 17 minutes before being ejected.

*Editor’s note: Above the byline is the photo gallery from Monday evening’s game, with all photos taken by DC-area photographer Yusuf Abdullah. After clicking on the first photo to enlarge the picture, make sure to press the left and right arrow buttons to scroll through the rest of the pictures. There are eight pictures in total.