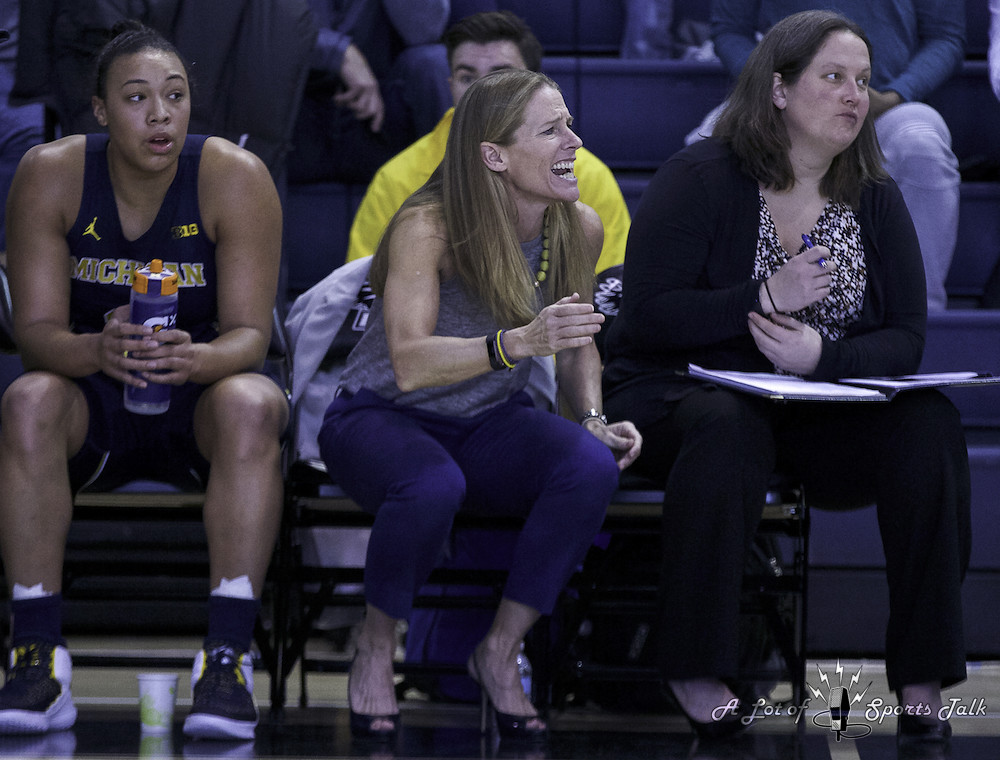 Michigan head coach Kim Barnes Arico is definitely one to wear her emotions on her sleeves on the sidelines. As a player, Barnes Arico was a standout guard at Montclair State University, playing under the tutelage of Alice DeFazio (née Schmidt), a member of the Montclair State team that made the AIAW Final Four in 1978 and who was finalist for the 1980 Wade Trophy given to the national player of the year. In case you were wondering, Naismith Basketball Hall of Famer Nancy Lieberman won the Wade Trophy in 1980 while playing for Old Dominion University. (Photo by Robert Cole)
0 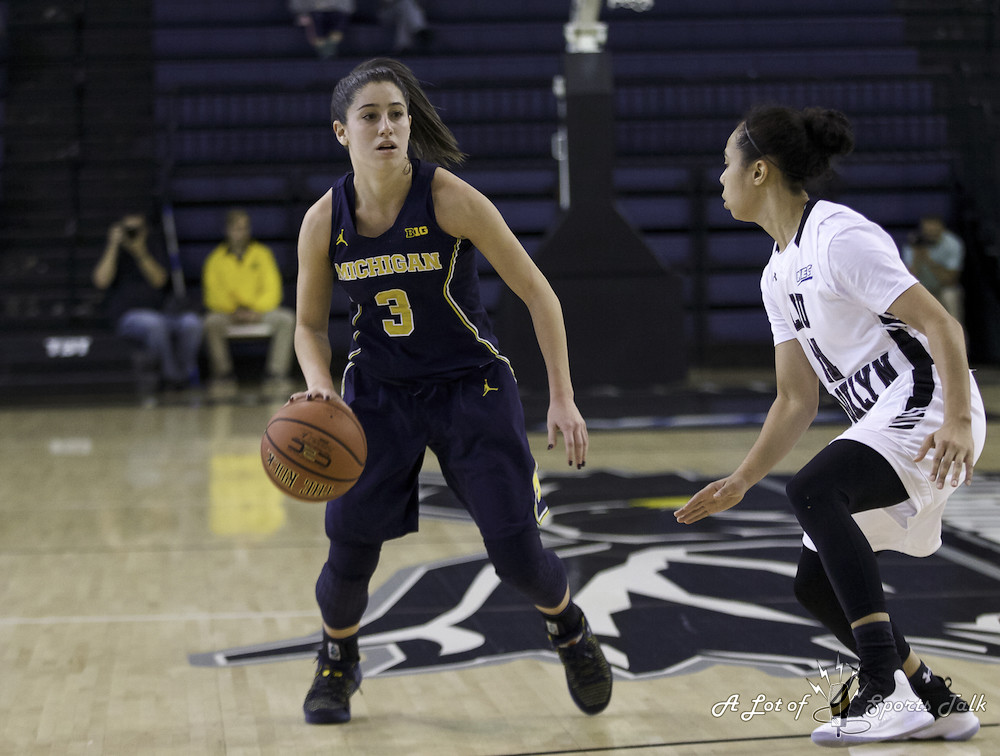 Senior guard Katelynn Flaherty (3) has been one of the most prolific scorers in women's college basketball over her time in Ann Arbor, as her points total of 2,230 ranks second among all active D-1 players. Ironically, the leader in that category plays for Michigan's fiercest rival, Ohio State guard Kelsey Mitchell. (Photo by Robert Cole)
0 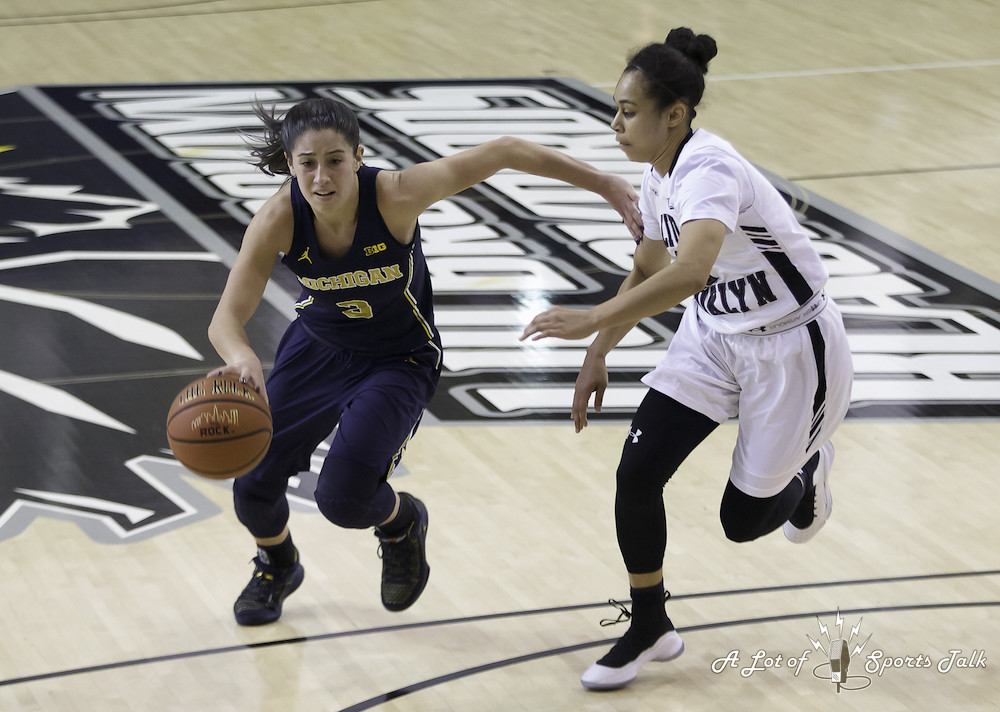 This season, Flaherty has had to play more of the point guard role to account for the loss of graduated senior Siera Thompson. Whether on the ball or off of it, Flaherty is almost guaranteed to get her points, and in bunches, every time she touches the floor. (Photo by Robert Cole)
0 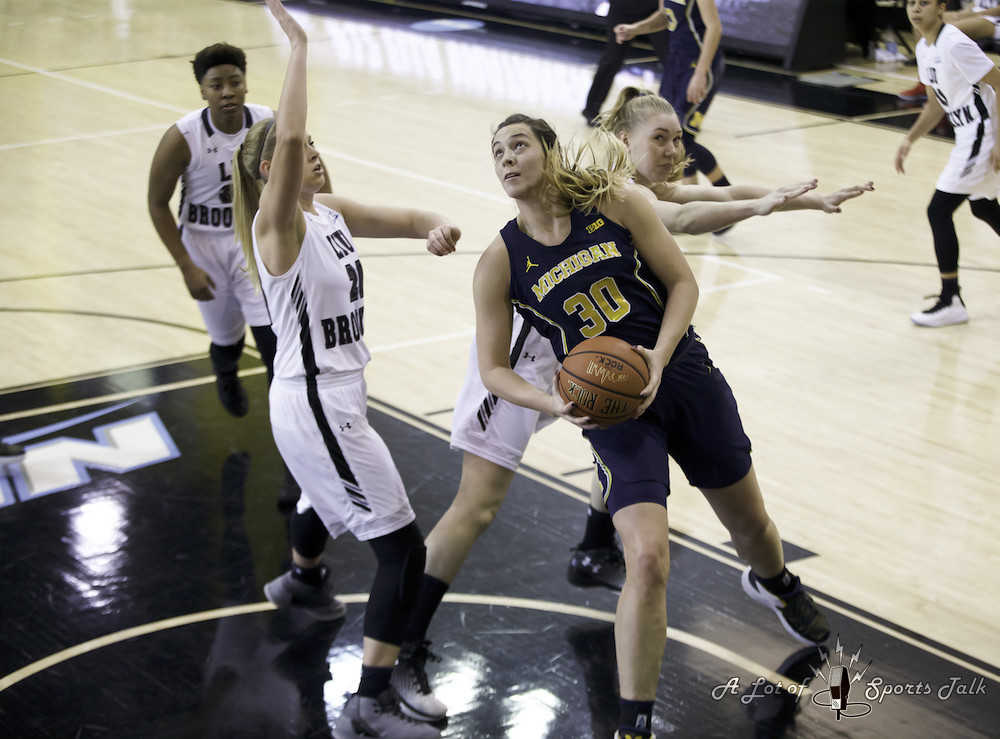 Selected as an All-Big Ten First Team by the coaches and Second Team by the media last season, junior forward Hallie Thome (30) was also named to the 2017 WNIT All-Tournament Team, accompanied by Flaherty. (Photo by Robert Cole)
0
Load More

NEW YORK — For one afternoon, Michigan head coach Kim Barnes Arico was back home in the New York City area, the place she thought she might never leave.

Born in Long Island, Barnes Arico’s burgeoning basketball acumen quickly became interwoven with the city forever associated with some of the legends of the sport, from being a star guard at college basketball powerhouse Montclair State University across the Hudson River in New Jersey to being a rising star in the coaching fraternity, a journey that featured 10 wildly successful seasons leading the St. John’s (NY) University women’s basketball team in the borough of Queens. Last Saturday brought the opportunity for her to stalk the sidelines on New York City soil once more, and it also allowed so many of her basketball memories made in this area to reemerge once more while leading the Wolverines to a victory over LIU Brooklyn.

“I love New York; New York is home. New Jersey is home,” Barnes Arico told A Lot of Sports Talk after the game on Saturday. “My friends and family are all here. I’m surrounded by my college basketball coach (former Wade Trophy finalist Alice DeFazio, née Schmidt) to the left, my parents on the right. It’s just a wonderful opportunity for me to come home. Greatest city in the world.”

Barnes Arico asserted without hesitation that New York is the “greatest city in the world,” but it was the city of Ann Arbor that whisked her away from the Big Apple almost six years ago after she accepted the job with the Wolverines. Not only was it a chance to make her mark at one of the brand names of collegiate sports, it also was a chance to rub elbows with fellow successful coaches in the Wolverines athletics department, including softball head coach Carol Hutchins, the winningest softball coach in NCAA history who was an influential person in the Title IX fight for gender equality, starting when Hutchins was a basketball player at Michigan State in the 1970s.

“Every single person you’re surrounded by, the Michigan difference is real,” Barnes Arico continued. “I just feel fortunate to come to work every day and be surrounded by excellence, and I learn from them each and every single day.”

Each of Barnes Arico’s completed seasons while at Michigan has resulted in a 20-win campaign, with her first season concluding with the school’s first NCAA Tournament win since 2001 when it defeated Villanova in the 2013 NCAAs. However, the Wolverines, despite another four 20-win seasons on the spin, have not reached the Big Dance since, including last season’s shocking omission from the field of 64 in which the Wolverines finished 11-5 in Big Ten play.

The snub admittedly stung the program, but Barnes Arico rallied her team for a postseason run as Michigan ended up going all the way to win the WNIT Championship, defeating Georgia Tech at home in triple overtime to become one of the few college basketball teams in the country to complete their season with a victory.

Having to use being snubbed from participating in March Madness might become trite after four such instances running, but last season’s omission in particular has definitely acted as a burr under this team’s saddle going into this year.

“I definitely think so,” said Barnes Arico about whether last season’s NCAA Tournament miss is a source of motivation. “Because I think the NCAA made a mistake last year, and I think we showed them that by winning the WNIT championship.

One thing that already is in the Wolverines favor in putting themselves in the best position to earn an at-large bid to the NCAA Tournament, if it is necessary, has been the challenging non-conference schedule they have already embarked on, including last night’s victory at home against Marquette, winners of the Big East Tournament last season.

“Coming into this year, the WNIT asked us to play in the preseason tournament against Louisville,” said Barnes Arico. “The ACC/Big Ten Challenge picked us to match up with Notre Dame. So I think the rest of the country knows what kind of team we are.”

The country may not know how good the team’s leading scorer, senior guard Katelynn Flaherty, is just yet. The Point Pleasant, N.J. native not only is the school’s all-time leading scorer with 2,230 points, but she only trails Ohio State All-America guard Kelsey Mitchell as D-1’s active leader in career points scored. Before the end of the season, Flaherty should break the all-time record for points in Michigan basketball history regardless of gender, a mark held by former NBA All-Star Glen Rice, who led Michigan to its first major national basketball championship when the Wolverines won the NCAA title at the 1989 Final Four.

Flaherty led the school to its second, as she averaged 21.3 points per game in the six games in the WNIT and poured in 27 in the title game against the Yellow Jackets. What makes the scoring guard such a dynamic player?

According to Barnes Arico, it doesn’t hurt that Flaherty comes from the same area of the country as the head coach.

“She’s Jersey strong,” said Barnes Arico. “She’s certainly got some swag about her. She is a scorer. She scores like nobody I’ve ever seen in my life. She can finish around the rim. She has incredible touch. I rebounded for her during warmups and she didn’t miss a shot. Her mother used to tell me she used to rebound a thousand shots for her and she’d make over 900. You don’t hear of those kind of things. She’s an incredible worker, she’s deserving of everything she gets and she’s just a special player. I’m blessed to have her in our program.”

Far from a one-woman team, the Wolverines have a perfect complement to Flaherty in the frontcourt in junior Hallie Thome, an All-Big Ten First Team selection by the coaches last season after averaging 16.2 points and 7.1 rebounds while shooting 61 percent from the field.

“Players like Katelynn Flaherty and Hallie Thome and (senior forward) Jillian Dunston know how to win,” said Barnes Arico. “They’re winners and they want to prove to the rest of the world that [the NCAA Selection Committee] made that mistake, so they’re rubbing that off on all the incoming players — that winning attitude and that passion for the game.”

The same winning attitude and passion for the game is something Barnes Arico possesses in spades, and it has definitely spread to the players and fans in Ann Arbor during her time in the Midwest. But she always is appreciative of those in the Northeast who helped her to originally build that passion, and getting a chance to see those influential people in person, including her parents and her former head coach, proved to be a reminder of what has gotten her to where she is in the game of basketball today.

“Some of the most important things are to recognize the people that really impacted your life,” Barnes Arico said. “It’s about the ball going through the hoop, but really, it’s about the people that are in your lives and the people that you get to surround yourself with every single day. I hope that for the players in my program, I hope I can be the mentor to them and have those relationships with them 25 years after they graduate like [my parents and Coach DeFazio] have for me.”