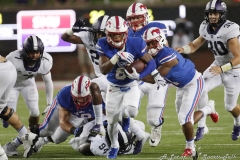 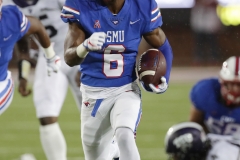 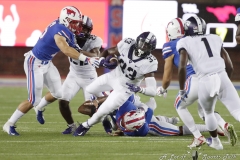 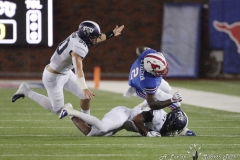 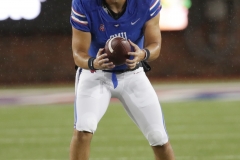 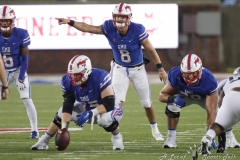 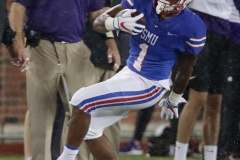 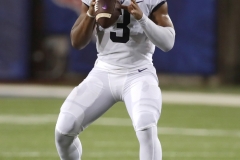 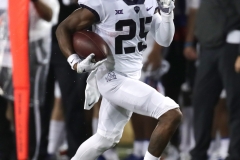 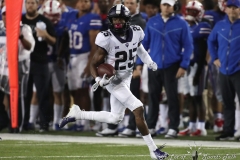 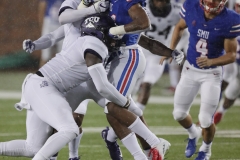 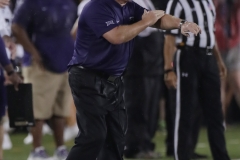 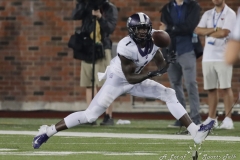 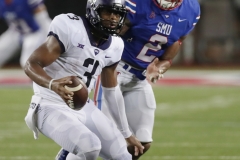 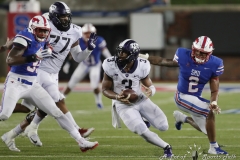 DALLAS — Instead of possibly leveling the playing field a little more, the extended weather delay only put off the inevitable for a couple of hours as No. 16 TCU continued its dominance against its Metroplex rival on Friday night.

Horned Frogs quarterback Shawn Robinson threw for a touchdown and ran in another while wide receiver KaVontae Turpin gave the team a much-needed spark with a 78-yard punt return for a touchdown as TCU coasted to a 42-12 victory over SMU, its first-ever seven-game winning streak against the Mustangs in the game for the Iron Skillet.

The game was delayed for over and hour and a half as lightning in the area forced the teams to stay in the locker room at the time kickoff was originally scheduled. Once the game commenced, it was the unheralded Mustangs who jumped out on top, with running back Braeden West scampering into the end zone from 51 yards out to give SMU a 7-0 lead less than two minutes into the game. It soon got worse for the Horned Frogs as a dropped snap on a punt led the ball going out of the end zone for a safety to put TCU into a 9-0 first-quarter hole.

Possibly looking ahead to its matchup against No. 3 Ohio State next week in Arlington, TCU was snapped back into life in the raw, rainy conditions when Turpin fielded a punt and streaked up the middle of the field on his way to a 78-yard punt return score, his school-record fifth special teams touchdown of his career and fourth on a punt return.

The soggy conditions that hurt the Horned Frogs also ended up helping TCU on its way to taking control, as wide receiver Jaelan Austin recovered a fumble from teammate and running back Sewo Olonilua in the end zone to give TCU the lead for good at 14-9 midway through the second quarter. Early in the third quarter, linebacker Alec Dunham recovered a fumble from Mustangs quarterback Ben Hicks and returned it 23 yards for a touchdown for a 21-12 lead. The Horned Frogs scored the game’s final 30 points.

*Editor’s note: Above the byline is the photo gallery from Friday’s game, with all photos taken by Dallas-area photographer Ross James. After clicking on the first photo to enlarge the picture, make sure to press the left and right arrow buttons to scroll through the rest of the pictures. There are 15 pictures in total.