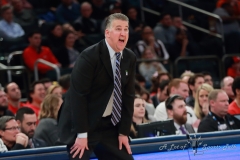 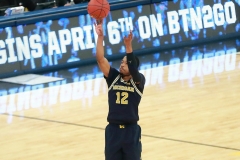 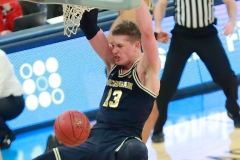 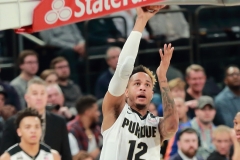 NEW YORK — It took until the penultimate month of the college basketball season for Michigan head coach John Beilein to figure out what he really had with his collection of Wolverines players, especially after the graduation losses of stalwart performers who led the team to the 2017 Big Ten Tournament title and a Sweet 16 appearance.

It’s now March, and the Wolverines’ stellar play over the course of four days in New York City may be the perfect indicator that Michigan is as dangerous as any other in the 2018 NCAA Tournament.

Michigan’s place in the Big Dance was confirmed on Sunday evening as the fifth-seeded Wolverines defeated No. 3 Purdue 75-66 at Madison Square Garden to win their second consecutive conference tournament championship. Forward Moe Wagner led four players who scored in double figures for Michigan with 17 points on his way to winning the tournament’s Most Outstanding Player award.

Last season, the Wolverines had seniors like Zak Irvin and Derrick Walton to lean on to help carry them to a championship, but the relatively young Wolverines, while extremely talented and helping to lead Michigan to a surefire NCAA Tournament bid before playing in this year’s tournament, endured more than a few bumps along the way as Coach Beilein wondered if his team was going to jell before the business end of the season came to pass.

Beilein can wonder no more.

“It was really hard, because we had just — we had extremely talented players last year that had really been through the process before,” said Beilein after the game. “And so we let them lead.

“Now, we had all new leadership. The role players had to step up. And I think it wasn’t until we got almost until February that our coaching staff just figured out a little bit what we could do and what we could expect.”

Like Wagner, a few other role players from last season stepped up – especially during the tournament – to help bring home more basketball championship hardware to Ann Arbor. Guard Muhammad-Ali Abdur-Rahkman scored 15 points against the Boilermakers, including three three-pointers, on his way to being named to the Big Ten All-Tournament Team. Sophomore guard Zavier Simpson scored 10 points today and Jon Teske, another sophomore, had 14 points in 21 minutes off the bench.

Because of the Big East Tournament taking place at Madison Square Garden in its regularly-slotted time, the Big Ten, which staged this year’s tournament in New York, had to play the tournament a week early, and all teams heading to the postseason in the conference will have a week off before playing in the first round of their respective tournaments.

That might be a detriment to the Wolverines since they won’t be able to carry their momentum into the tournament in 4-5 days like normal, but, at the very least, Beilein knows a whole lot more what his team is capable of, and he will be able to think that with another championship in tow back to Ann Arbor.