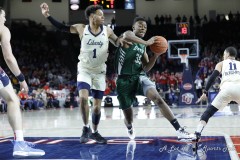 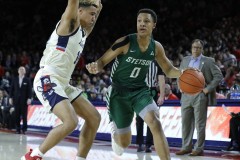 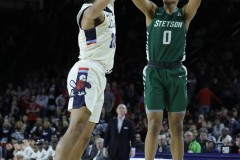 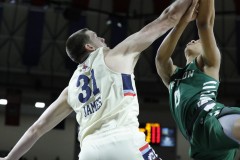 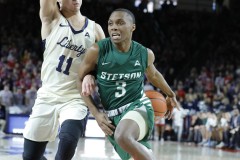 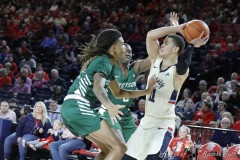 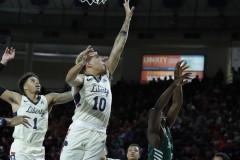 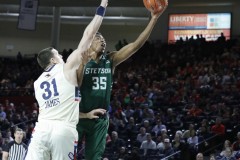 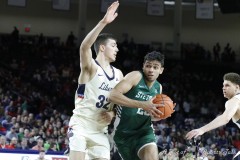 Led by Scottie James, Caleb Homesley, Georgie Pacheco-Ortiz and reserve Myo Baxter-Bell, the Flames dominated Stetson from the jump en route to a wire-to-wire 77-49 victory on Senior Day, which also happened to be the last regular-season game to be played at the Vines Center.

Liberty improves to 26-3 on the season, and is one win away from its last two remaining games from clinching the No. 1 seed in the upcoming 2020 A-Sun Tournament, allowing the Flames to host all of their games in the tournament.

James, Homesley and Pacheco-Ortiz, the spearheads to the Flames winning the A-Sun Tournament last season and then delivering the school its first-ever NCAA Tournament victory against Mississippi State, all had standout performances today, and, along with Baxter-Bell, the seniors combined for 51 points, 17 rebounds and 10 assists. Both James and Baxter-Bell made all four of their field goal attempts, while Homesley led all scorers with 22 points.

“Tonight was special because those seniors have labored pretty hard to elevate the stature of our program and bring some light to the Kingdom of God and Liberty University,” said Flames head coach Ritchie McKay. “I am glad we got a chance to celebrate their efforts with a win. They are a special group of young men.”

After winning four straight and eight of their last nine to seriously contend at the top of the A-Sun, the Hatters have now lost two straight. Jahlil Rawley led Stetson, who made just 15 of their 44 shots from the field (34.1 percent), with 12 points. Mahamadou Diawara was the only other player on Stetson to score in double figures, finishing with 11.

*Editor’s note: Above the byline is the photo gallery from Saturday evening’s game, with all photos taken by Lynchburg-area photographer Pascale Renald. After clicking on the first photo to enlarge the picture, make sure to press the left and right arrow buttons to scroll through the rest of the pictures. There are nine pictures in total.