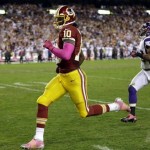 The script was unfolding in a familiar, yet agonizing way once again in front of the Washington Redskins fans. The home team’s lead was fading fast, and running away from that reality was definitely in their minds.

Running away from Minnesota Vikings defenders was on Robert Griffin III’s.

Griffin III’s 76-yard touchdown scamper on a third-and-6 with under three minutes to go sealed a 38-26 triumph over the Vikings, snapping an eight-game home losing streak that dated back to Sept. 18, 2011.

Suffering no ill effects of a concussion that knocked him out of the game in the loss to Atlanta last week, Griffin III accumulated 320 total yards and three total touchdowns — 138 of those yards on 13 rushes. He also completed 17of his 22 passes.

Despite repeated calls to run fewer times or get down quicker to avoid repeated hits, Griffin was his usual dual threat self, and the play that put the game away presented the same dilemma: whether to play it safe or use his running ability to his maximum to secure victory.

“We kind of felt like they were going to pressure us in the situation,” Griffin said. “I saw the blitz and I was thinking I’m either going to throw it hot, or if they miss this blitz and don’t hit it the right way, I’m going to run for the first [down].”

“I took off running and got to the sideline, and thought about running out of bounds, because everyone has been telling me that lately. I felt like I had the guy out flanked, and I just took off running.”

“The rest is history.”

The Redskins (3-3) would have suffered ignominious history, a ninth straight home loss, without the effort of their defense in the first quarter.

Each of the Vikings first three possessions ventured within 10 yards of the end zone, only for Minnesota to settle for short field goals each time. The last of that sequence, a Blair Walsh 27-yarder, gave the Vikings a 9-0 lead that they took into the second quarter.

The Vikings (4-2) out-gained Washington 148 yards to 45 in the first quarter, possessing the ball for over 10 minutes. Running back Adrian Peterson, who suffered a season-ending ACL and MCL tear in his left knee on the same field last Christmas Eve, rushed for 47 yards on seven carries in the first quarter.

“Instead of nine points, it could have been 21 points,” Redskins head coach Mike Shanahan said. “All of a sudden, it’s pretty hard to catch up, especially against a defense like that.”

Washington’s offense finally woke up in the dying moments of the first quarter, with Griffin III completing passes of 15 and 16 yards to tight end Fred Davis. Kai Forbath, signed this week to replace the now-released Billy Cundiff, converted his first career field goal attempt, a 50-yarder, to put the Redskins on the board early in the second.

After a three-and-out by Minnesota, the Redskins took the lead on a 90-yard drive, aided by a roughing the passer call on Vikings linebacker Erin Henderson. Three plays later, another standout offensive rookie, running back Alfred Morris, plunged in from one-yard out to give Washington the lead—one it would not relinquish for the rest of the game.

The momentum of the game changed on the next play from scrimmage. Vikings quarterback Christian Ponder lost control of the football as he was trying to throw the football in the pocket. The ball was recovered by defensive lineman Lorenzo Alexander and returned to the Viking six-yard line. One play later, Griffin threw his first of two touchdown passes, finding fullback Darrel Young wide open in the left flat to give the Redskins a 17-9 lead going into halftime.

“Turnovers are never good,” said Ponder, who has thrown four interceptions in his last two games after none in the team’s first four games.

Washington’s rhythm on offense continued without interruption, extending its lead to 24-9 on the first possession of the second half on its third scoring drive of 10 or more plays. Griffin III scored with his legs this time, a seven-yard run off of left tackle after tucking the ball down on a pass play, putting an exclamation point on the play with a dramatic dive to break the plane. The risk of suffering another concussing hit was not present after going through practice this week.

“The great part about it is Robert felt good throughout the week,” Shanahan said. “After he had the concussion, he had no side effects. So now you have to let the person play the game.”

“Sometimes a designed run helps the quarterback. If we would have gotten a dropback pass against that defense today and didn’t have some designed runs, there would have been a number of sacks. Robert, by doing what he does – keeping a defense off balance – really gives him the chances in my opinion to stay healthier.”

Ponder once again turned over the ball — this time to begin the fourth quarter — and it directly led to Washington’s biggest lead. A poorly overthrown ball to the right flat was intercepted by former Viking Madieu Williams, who dove to make the pick and afterwards raced across the field to score on the 24-yard return and seemingly put the game away at 31-12 with 12:40 remaining.

Minnesota then mounted a comeback that closed the gap to within five. Ponder hit Michael Jenkins for a nine-yard score almost halfway through the fourth, and the two-point conversion on a Kyle Rudolph catch cut the lead to 31-20.

A three-and-out followed on Washington’s ensuing possession, and Minnesota promptly scored again to make a 5-1 record seem much more of a reality. A pass interference call in the end zone on cornerback Josh Wilson put the ball at the one, and Ponder’s toss to Rudolph from a yard out cut the lead to five at 31-26 with 3:36 to go. The two-point conversion was missed. With all three of its timeouts remaining, Minnesota chose to kick the ball deep, and was in prime position to get the ball back before Griffin III’s run that burned the Vikings blitz sealed it.

“We were very concerned about [blitzing] coming into the ball game,” Vikings head coach Leslie Frazier said. “We wanted to pick our spots when we did do it. We knew what the potential ramifications would be if we did do it and didn’t get there.”

Peterson ended up with 79 yards rushing on 17 carries.