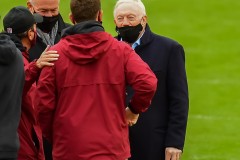 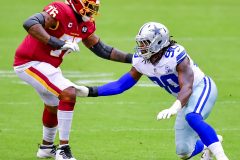 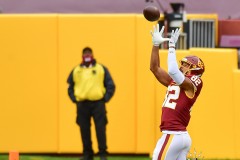 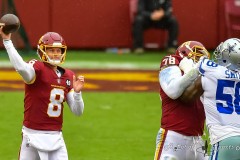 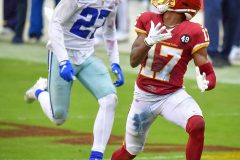 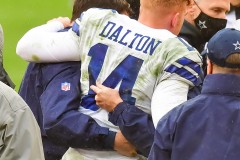 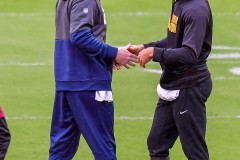 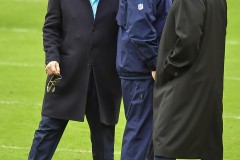 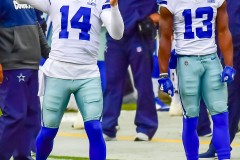 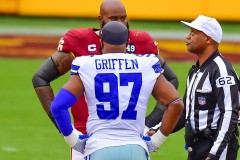 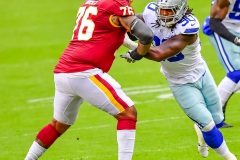 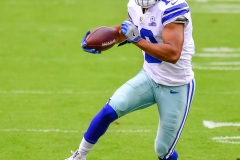 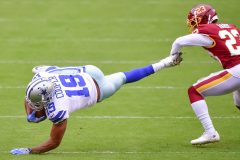 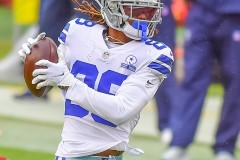 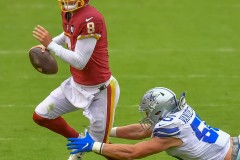 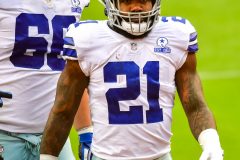 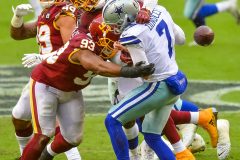 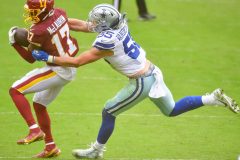 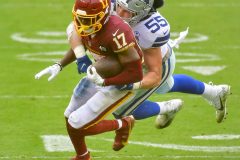 WASHINGTON — Without the fans nor the game’s marquee name on the field, the latest installment of the rivalry between the Washington Football Team and the Dallas Cowboys lost some of its bite going into Sunday. Fortunately for Washington, its defense bit a huge chunk off of Dallas’ offense on its way to getting a step closer to the top of the NFC East.

Washington took advantage of the absence of Dak Prescott by sacking Dallas quarterbacks six times in a dominant defensive performance, spearheading a 25-3 win over the Cowboys at FedExField on Sunday afternoon. Quarterback Kyle Allen was efficient in throwing for 194 yards and two touchdowns while Washington controlled the game by running for 208 yards and possessing the ball for more than 36 minutes.

The relentless play from Washington’s defense started on their opening series on the field, one that started after Dallas stopped Washington on the 1-yard line on fourth down. Safety Landon Collins sacked Dalton and forced a fumble that ended up being recovered in the end zone by Dallas for a Washington safety for the game’s opening score at the 7:54 mark. On the ensuing drive after the free kick, Washington 63 yards on seven plays and capped the drive with an Antonio Gibson 12-yard touchdown run and a 9-0 advantage.

More than 48 minutes remained in the game after Gibson’s score, but the touchdown all but wrapped up the game for Washington, especially with the defensive effort that was to come against an anemic Cowboy offense.

Tony Pollard’s 67-yard kickoff return after Gibson’s score gave Dallas the ball at Washington’s 34, but the Cowboys gained only seven yards on three subsequent plays before settling for a Greg Zuerlein 45-yard field goal to cut their deficit to 9-3 late in the first.

Dallas had two more drives that went into Washington territory, both in the second quarter, but they ended on a turnover on downs and an interception at Washington’s 5-yard line by Cole Holcomb.

Two plays after the turnover on downs, Allen went deep and found receiver Terry McLaurin streaking down the left sideline for a 52-yard touchdown to give Washington a 15-3 lead after a failed two-point conversion.

Dallas’s offense, without Prescott after he suffered a compound fracture of his left ankle two weeks ago in a game against the New York Giants, was completely feckless in the second half, gaining just 32 total yards in the game’s final 30 minutes. Matters were made worse late in the third quarter, when Dalton was on the receiving end of an illegal hit by Washington linebacker Jon Bostic that left the Dalton in pain on the ground for a number of minutes. Dalton left the game with a concussion while Bostic, who launched into Dalton as the latter was sliding to the ground, was ejected.

Rookie Ben DiNucci came in to spell Dalton, but immediately was sacked on his first two dropbacks, by Tim Settle and Montez Sweat respectively for Washington.

The three points allowed by Washington was the fewest points it had ever allowed against Dallas in the long-standing rivalry.

The win allowed Washington to be even in the win column with both Dallas and Philadelphia, with Philadelphia leading the NFC East by a half-game with its 2-4-1 record.

*Editor’s note: Above the byline is the photo gallery from Sunday’s game, with all photos taken by DC-area photographer Yusuf Abdullah. After clicking on the first photo to enlarge the picture, make sure to press the left and right arrow buttons to scroll through the rest of the pictures. There are 19 pictures in total. Along with hoping that you enjoy the pictures, we are encouraging those of you who are serious about educating oneself and making a tangible difference in the fight against social injustice — but struggling to find a starting point — to click this link, an anti-racism resource guide for white people.