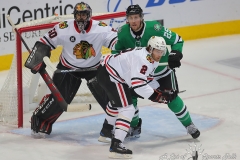 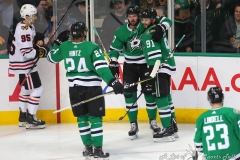 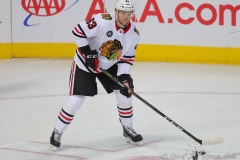 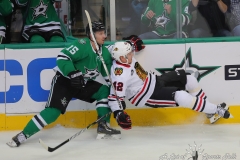 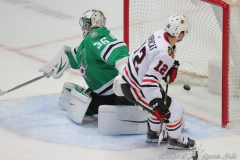 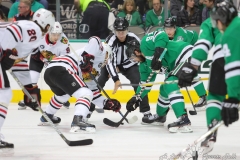 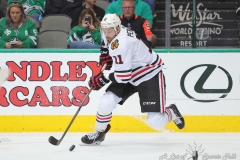 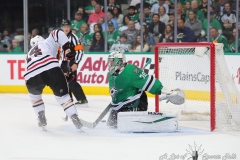 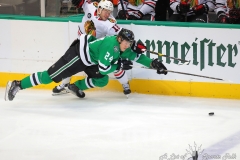 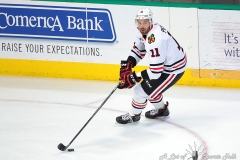 DALLAS — The Chicago Blackhawks may have left it too late to realistically make good on a final push to make the Stanley Cup Playoffs, but their playoff intensity against one of the teams currently occupying one of those coveted playoff spots was evident from the start on Saturday night in earning an important two points.

David Kampf and Alex DeBrincat scored both of Chicago’s goals in the first period while Corey Crawford was steady in goal in leading the Blackhawks to a 2-1 away victory over the Dallas Stars at American Airlines Center. In ending Dallas’ four-game winning streak, the Blackhawks won their second straight after losing four in five that put a severe dent in their already-faint playoff hopes. Chicago is now seven points behind Minnesota for the second and final Wild Card spot with 14 games remaining.

“That felt like playoff hockey almost,” said Crawford, who won his third game in four since coming back from a concussion. “Right from the first face-off, it was intense. All our guys were into the game. Guys were making great plays, smart plays, were blocking shots. That was a really solid win.”

All three goals scored in the contest came in the first period, as Kampf converted on a 2-on-1 odd-man rush with Chris Kunitz, with the two passing back-and-forth before Kampf beat Stars goalkeeper Anton Khudobin 5:10 into the period for the game’s opening goal. That foray was one of a number of odd-man chances the Blackhawks had throughout the game, mostly coming from Chicago’s 21 blocked shots in the
contest.

Alexander Radulov tied the game 73 seconds later with his 21st goal for Dallas, pouncing on a rebound off a shot from Tyler Seguin before beating Crawford with a backhand in front of goal.

DeBrincat provided the third goal of the period — and the final goal of the game — after springing loose after a pass from Patrick Kane and finding himself on a breakaway, beating Khudobin with a forehand to the blocker side with 36 seconds remaining in the period.

Though the Stars came into the game off of back-to-back shutout victories, it was Chicago’s defense that was smothering and took over the game. In the third period, the Blackhawks allowed just five shots on goal and prevented the Stars from producing Grade-A scoring chances on Crawford in an effort to tie the game.

“We didn’t have tons of energy,” Dallas coach Jim Montgomery said. “The first period wasn’t bad. Second period, that’s where I thought the game kind of got away from us. They out-skated us. They kind of skated us into the ground. Third period, we were smarter, but we still couldn’t generate.”

Khudobin made 37 saves in defeat for the Stars, who remain one point ahead of the Minnesota Wild for the first Wild Card playoff spot in the Western Conference.

*Editor’s note: Above the byline is the photo gallery from Saturday’s game, with all photos taken by Dallas-area photographer Ross James. After clicking on the first photo to enlarge the picture, make sure to press the left and right arrow buttons to scroll through the rest of the pictures. There are 10 pictures in total.