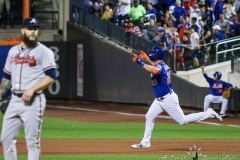 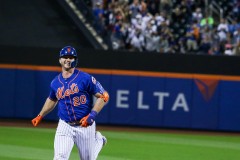 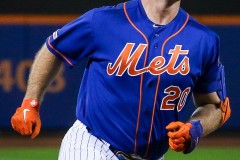 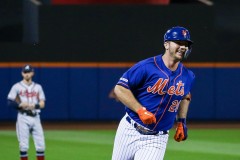 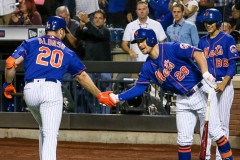 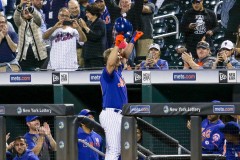 NEW YORK — Befitting the history major that he was while at the University of Florida, New York Mets first baseman Pete Alonso is effusive in the praise of the great baseball players who came before him and allowed him to further appreciate the beginning of his big league journey.

After tonight, almost no man who has ever put on a Major League uniform has ever had a better season with the home run in their rookie season than the man who made his own history with his first swing at Citi Field on Friday.

Alonso lined a home run just over the left field wall for home run No. 52 in the Mets’ 4-2 victory over Atlanta, tying the Major League record for home runs in a rookie season. J.D. Davis also added a two-run shot for New York to help secure the Mets’ 84th win of the season.

The night belonged to Alonso, however, who launched his arms into the air in glee soon after his home run ball went over the orange line and hit the back wall in left. Alonso, who has shown maturity beyond his 184 days of Major League service by always putting the team first ahead of his home run chase in his commentary to the media, allowed himself to savor the moment and say a few words about his personal accomplishment.

“When I think of guys like [the great players in] baseball history, I think of old-time guys like Lou Gehrig, Babe Ruth, Barry Bonds,” Alonso said. “To think that as a rookie, I hit more homers than everyone except for one guy, it’s nuts. It’s crazy.”

That one guy who has hit as many in his rookie year than Alonso plies his trade in the same city, New York Yankees outfielder Aaron Judge, who hit 52 in his rookie campaign two years ago. Alonso’s pursuit of Judge added extra intrigue given the nature of the big brother/little brother nature of the franchises in the Big Apple.

Tied at the top, still got two more to play…👀 pic.twitter.com/mO9VO5cr6z

In a season filled with enrapturing ups and embarrassing downs both on and off the field, Alonso’s ascent into the Major League power elite has been the team’s bright spot all season long. The Major League leader in home runs had already shattered the previous National League rookie record (Cody Bellinger’s 39 for the Los Angeles Dodgers in 2017) and set a new Mets single-season home run record after passing both Todd Hundley and Carlos Beltran’s 41-homer seasons in a Mets uniform. The only thing that was left for Alonso to track down was the Major League rookie record, which he was able to achieve in front of the appreciative home crowd.

“You saw the fans tonight, they wanted him to tie that so bad,” Mets manager Mickey Callaway said. “And now they are wanting him to take over the lead, and he’s been outstanding. There is something about Pete that draws everybody in and he’s had a heck of a season.”

Even with the maturity that he has shown in year one, Alonso could not help himself feel as if he was back in the sandlot in his days growing up in Tampa after the record-breaking moment had occurred.

“When I was rounding the bases, I felt like a little kid, like a 7-year-old kid,” Alonso said. “I was just kind of overcome with pure joy and emotion. I can’t think of a happier time in my life playing baseball. That’s what dreams for me are made of. It’s unbelievable that it happened.”

*Editor’s note: Above the byline is the photo gallery from Thursday evening’s game, with all photos taken by ALOST photographer Arturo Holmes. After clicking on the first photo to enlarge the picture, make sure to press the left and right arrow buttons to scroll through the rest of the pictures. There are 20 pictures in total.