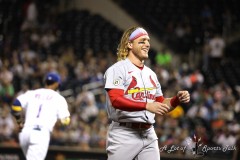 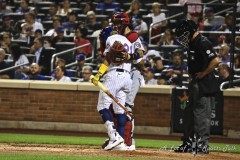 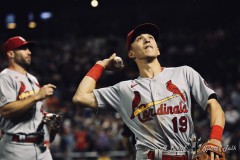 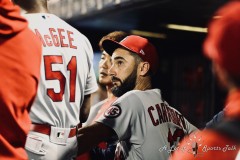 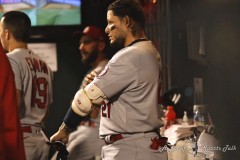 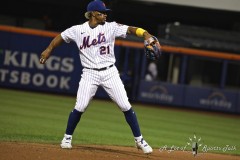 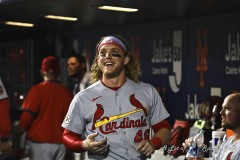 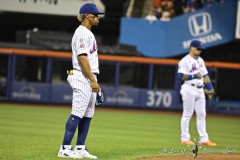 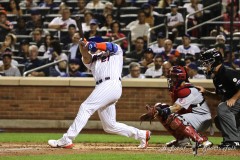 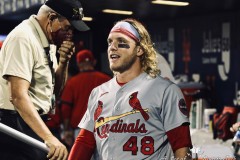 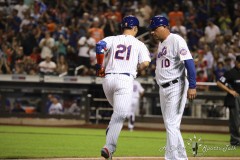 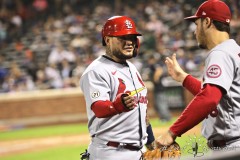 NEW YORK — Once he finished putting on a memorable showing in front of his family in his hometown, St. Louis Cardinals outfielder Harrison Bader got to enjoy another aspect of New York City as a spoil for his team’s pivotal series sweep in the Big Apple during the postgame: New York-style pizza.

Bader was one of six Cardinals in the lineup to have multiple hits and one of four to hit one out of the yard, helping to lead St. Louis to a 11-4 victory over the New York Mets to sweep the three-game set at Citi Field. Starting pitcher Jon Lester allowed three runs (two earned) in six innings as the Cardinals have won seven of their last eight games.

With his parents and uncle sitting in the front row behind home plate, Bader, who was born just north of New York City in Bronxville and attended Horace Mann High School in the Bronx, punctuated the Cardinals’ five-run explosion in the first inning with a bloop hit to center field that scored two runs — including Edmundo Sosa from first base — to give St. Louis a 5-0 lead and all the runs it would need to go on to win. To go with that bloop, Bader added a blast, lifting a Tylor Megill pitch into the left-field bleachers in the fourth inning in giving the Cardinals a 6-2 advantage.

In having himself a night in New York City in front of loved ones, Bader emulated a New York icon that he grew up watching from the shadows of his own house, Derek Jeter, who often had his parents in the stands of Yankee Stadium during his Hall-of-Fame career.

“There’s just something really special about watching your mom and dad play ball,” Bader said. “Just to have them for three games, in my home city, it was pretty special.”

On their first night during the summer while holding the playoff position in the National League, the St. Louis Cardinals wasted no time in signaling their intent of staying in that position until the end of the season. In the process, they might have also effectively eliminated a contender to their spot in the process.

St. Louis pounded out 16 hits, including five in that decisive first inning. The first four Cardinals reached base against Megill, as a walk to leadoff man Tommy Edman and clean-up hitter Nolan Arenado were sandwiched by doubles by Paul Goldschmidt and Tyler O’Neill, with the latter scoring Edman and Goldschmidt for the first runs of the game. Dylan Carlson also produced a run-scoring single in the inning to extend the lead to three.

*Editor’s note: Above the byline is the photo gallery from Wednesday evening’s contest, with photos taken by ALOST photographer Chris Simon. After clicking on the first photo to enlarge the picture, make sure to press the left and right arrow buttons to scroll through the rest of the pictures. There are nine pictures in total.