And Away They Gooooooooooooo! (USWNT at the 2019 FIFA Women’s World Cup)

It was only fitting that the team representing Old Glory put on the standout performance of the opening matches for each country in the 2019 FIFA Women’s World Cup, with the Stars on the flag representing the stellar play of every single player on the pitch and the Stripes turning out to represent every goal scored during the most dominant performance in the history of World Cup.

Alex Morgan scored five goals in a record-breaking performance to pace the U.S. Women’s National Team to a 13-0 thrashing of Thailand at the Stade Auguste-Delaune in Reims in Group F action. After what already was a comprehensive performance in the first 45 minutes, when Morgan, Rose LaVelle and Lindsey Horan scored for The States to open up a 3-0 halftime lead, the floodgates busted open in the first five minutes of the second half as the team scored four goals in the first 10 minutes to make it a laugher.

USA’s projected starting XI had to be adjusted before the start of the game, as center back Becky Sauerbrunn picked up a slight quadriceps injury and was ruled out. Instead of making a like-for-like replacement, head coach Jill Ellis decided to push holding midfielder Julie Ertz into Sauerbrunn’s place next to Abby Dahlkember along the backline while inserting attacking midfielder Samantha Mewis into the lineup. Before the start of this campaign, one of the biggest questions on the team was whether Mewis or Horan would start in the midfield, but both ended up in the starting lineup and had major impacts in making an already-potent offensive attack into a typhoon-like force.

Though the competition, with Thailand being ranked 34th in the world, makes for measured optimism going forward, the U.S. had to be pleased with the performance of right fullback Kelley O’Hara, who had an inch-perfect cross to set up Morgan’s headed goal to open the scoring and also won a couple of tackles in the middle of the park. The defensive abilities of O’Hara, along with left fullback Crystal Dunn, is perceived to be the weak link to this team, though their prowess going forward is not a question.

But the night belonged to Morgan, who tied soccer legend Michelle Akers and her performance in the first Women’s World Cup in 1991 against Chinese Taipei for most goals in a single World Cup match. A couple of her goals in the second half were particularly exquisite, including her blast from the top of the penalty area with her right (off) foot for the game’s ninth goal in the 74th minute and her tally in the 87th, where she played the ball out of the air and around a Thai defender with her first touch before putting her laces through and sending the ball into the top left corner.

Coming into tonight, Morgan was going through, for her, a scoring slump, with three goals in her last 10 games before heading over to France. For most, that rate of scoring would be far from considered a funk, but most do not have 106 career international goals in 164 games, like Morgan now has. 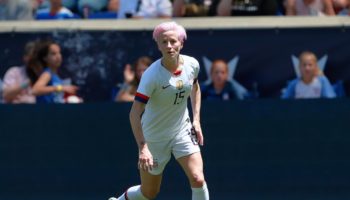 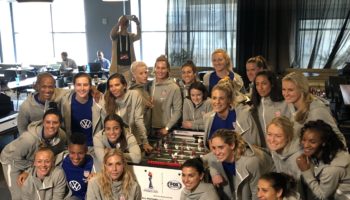