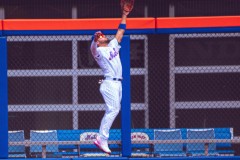 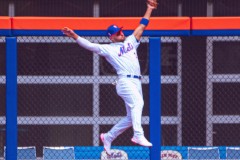 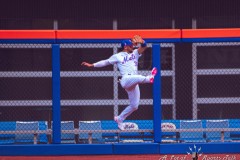 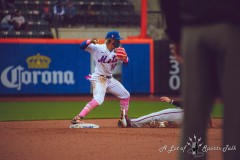 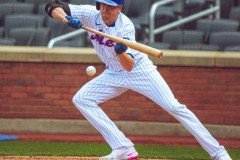 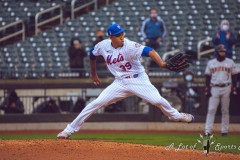 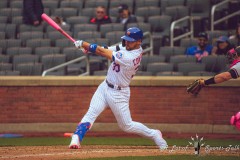 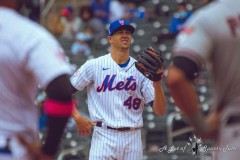 NEW YORK — While the ledger shows the New York Mets sweeping their weekend series as part of their best stretch of baseball in 2021, that stack of “W”s belie the strain and near-disasters that each game came with, and today’s win now comes with the added angst of the health of the game’s best pitcher.

Jacob deGrom left his start before the sixth inning with back tightness, though pitched long enough to earn the win in New York’s 4-2 victory over the Arizona Diamondbacks on Sunday afternoon. Michael Conforto went 2-for-4 and had an RBI single as the Mets have now posted a season-ling five-game winning streak.

Any good feelings from another win were tempered when deGrom, who allowed just one hit and a run over five innings, was removed before the start of the sixth inning after throwing a warmup pitch in the lead-up to the start of the sixth inning. Making his first start in 11 days after being scratched from his start on Wednesday in St. Louis with what the team described as right lat tightness, deGrom continued his dominant form despite admitting to the coaching staff that his body felt a little out of whack after all of the time off.

His body soon told him enough was enough, and after he and catcher James McCann called for the trainer in the sixth, the ultra-competitive deGrom knew his day was going to be over prematurely.

“It’s different [from the injury in St. Louis]. It’s the right side, but more in the lower back area, rather than higher up,” said Mets manager Luis Rojas. “No pain, just tightness. That’s what he told the trainer.”

deGrom’s exit might have also been precipitated by a couple of stressful innings on the mound and on the field. His perfect sacrifice bunt-turned-single down the third base line started a journey around the bases that led him home after a Michael Conforto two-out single gave the Mets their second run of the inning and a 2-0 lead.

In the fifth, deGrom put the first three batters on base after a Stephen Vogt double that split the diving attempts of Conforto and center fielder Kevin Pillar was sandwiched in between two walks. deGrom got Nick Ahmed to ground into a double play, allowing Arizona to score its first run, before striking out pinch hitter Christian Walker with runners on the corners to end the threat and keep the Mets ahead.

The physical toll those innings had on deGrom might not have been as painful as the mental anguish he suffered after realizing he needed to come out in the middle of what would have been another quality start.

“He was down. He wanted to pitch through it,” Rojas said. “You know how he is. You saw him. He bunted for a hit and was perfect for three innings and he was competing. But his demeanor changed when he was calling [for the trainer] from the mound.”

deGrom’s exit was the latest setback New York had to overcome in the series, with the bullpen coming through once more after having to pitch 7.1 innings in relief of David Peterson on Friday and went the whole game last night after starting Tommy Hunter as an opener. Miguel Castro started the sixth by hitting Pavin Smith and walking Josh Rojas, but left them both stranded in. scoring position when he induced a pop out from Vogt to end the inning.

The Mets tacked on single runs in the sixth and seventh innings to provide the bullpen enough cushion to close it out. Jacob Barnes went 1.1 innings and allowed a run — an Asdrúbal Cabrera pinch-hit homer — on two hits before Edwin Diaz came in to record just his second-ever five-out save. His first two outs came after he hit the first batter he faced, Josh VanMeter. Diaz followed that by inducing a ground ball from David Peralta that infielders Jeff McNeil and Francisco Lindor were able to turn into an inning-ending double play.

In the three games, New York’s bullpen, second in the National League in earned run average, allowed just four runs and 12 hits on 19.1 innings pitched while striking out 16 batters.

“We haven’t been putting up many runs to provide space between us and the opponent, so top to bottom, they’ve pitched a lot but they’re doing a great job in keeping us in the ball game and keeping us ahead,” Conforto said.

*Editor’s note: Above the byline is the photo gallery from Sunday afternoon’s game, with all photos taken by New York City-area photographer Roberto Carlo. After clicking on the first photo to enlarge the picture, make sure to press the left and right arrow buttons to scroll through the rest of the pictures. There are currently eight pictures in total.