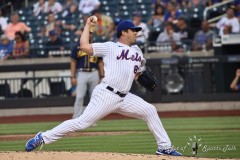 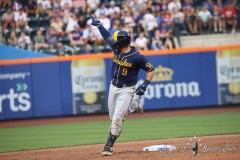 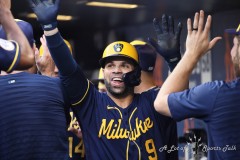 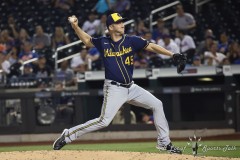 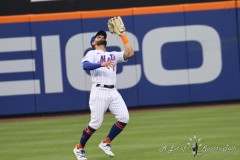 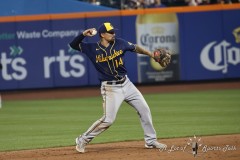 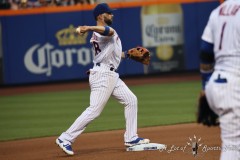 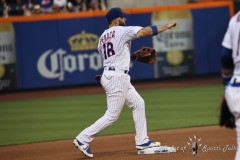 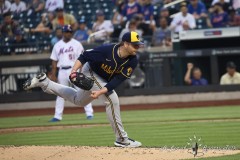 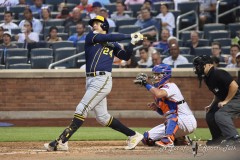 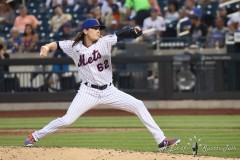 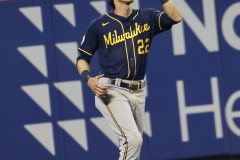 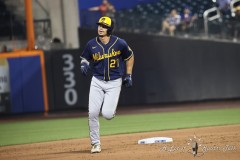 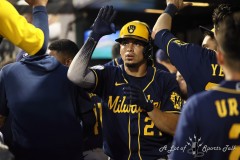 NEW YORK — In a season where the Milwaukee Brewers have struggled putting together consistent offense, reserve catcher Manny Piña could be seen as the walking embodiment of those ills at the plate. Could his game-winning hit on Monday night be a harbinger for things to come during the second half of the season?

Pina smacked a two-tun home run in the second inning to get Milwaukee on the board, and four pitchers combined on a three-hit shutout as the Brewers gained a split of doubleheader with a 5-0 victory over the New York Mets in Wednesday’s nightcap at Citi Field The Mets came from behind in extra innings to take the opener 4-3.

Milwaukee’s stellar pitching has been the catalyst for the team’s 11-game winning streak that they carried the day before coming into the Big Apple, masking an offense that continues to rank last in the National League in team batting average. Piña, the team’s reserve catcher, walked to the plate for his first at-bat with only one hit in his last 42 at-bats and last recorded a hit almost a month ago on June 13. On a 3-2 pitch from Mets starter Robert Stock, Piña smacked the ball over the left-centerfield wall for his fifth homer of the season.

Willy Adames added a sixth-inning solo shot and Luis Urías hit a two-run homer to complete the Brewers’ scoring tally, and Piña’s work at the plate complemented his game behind the plate, helping the Brewers to their ninth shutout.

The whitewash of the Mets’ offense was in serious jeopardy in the bottom of the sixth and the Brewers holding to 3-0 lead, as relief pitcher Brad Boxberger walked the first three batters he faced in front of the heart of New York’s order. Boxberger recovered to strike out the side, whiffing Francisco Lindor, Dominic Smith and Pete Alonso to complete his high-wire act unscathed.

Brett Anderson went the first four innings for the Brewers and allowed three hits, while reliever Jake Cousins came in and threw a perfect fifth inning to secure his first Major League victory. Stock, who was recalled by the Mets from Triple-A Syracuse yesterday to make the start, allowed the two runs from the Piña home run and four hits in four innings while striking out five.

*Editor’s note: Above the byline is the photo gallery from Wednesday evening’s contest, with photographs taken by ALOST senior photographer Robert Cole. After clicking on the first photo to enlarge the picture, make sure to press the left and right arrow buttons to scroll through the rest of the pictures. There are 14 pictures in total.