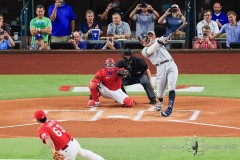 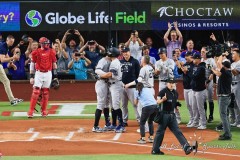 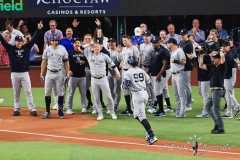 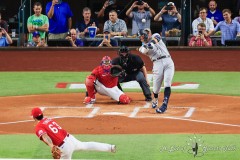 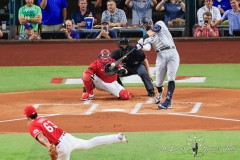 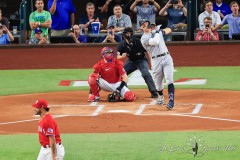 On Tuesday night just outside of Dallas, Judge eclipsed Roger Maris’ hallowed mark of 61 home runs by blasting No. 62 into the left field bleachers during the first inning of the Yankees’ 3-2 defeat to the Texas Rangers on Tuesday afternoon. Only three players in American League history have reached 60 home runs in a single season, and they have all worn pinstripes while manning right field: Babe Ruth, Maris, and now Judge.

Three pitches into the second game of a split doubleheader, Judge lifted a 1-1 slider from Texas starter Jesus Tinoco 391-feet and over the wall, setting off wild celebrations in the Yankees dugout, who all spilled out from there to greet Judge as he got ready to cross home plate. Almost of the announced crowd of 38,832, which included Judge’s parents, Patty and Wayne, stood up and cheered the historic moment, which came more than a week after Judge tied Maris’ mark of 61 homers last Tuesday in Toronto.

“I had a good feeling off the bat,” Judge said about his record-breaking clout. “I just didn’t know where it was going to land or what it was going to hit. There was a good sense of relief once I saw it in that fan’s glove.”

Along with the brute force from his swings, Judge’s record-breaking swing produced a touch of poetry, as No. 99 hit No. 62 in a game where the Yankees went down in defeat to see their record drop to…99 wins and 62 losses.

*Editor’s note: Above the byline is the photo gallery from Tuesday evening’s second game of a split doubleheader, with all photos taken by Dallas-area photographer Ross James. After clicking on the first photo to enlarge the picture, make sure to press the left and right arrow buttons to scroll through the rest of the pictures. There are six pictures in total. 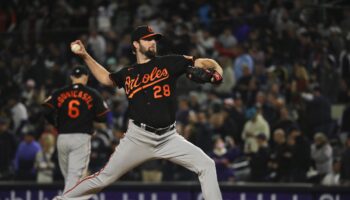