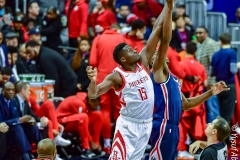 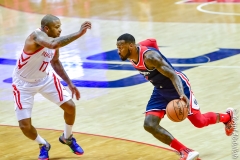 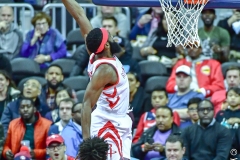 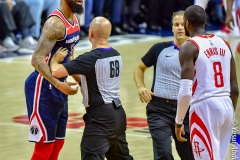 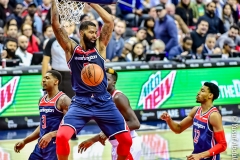 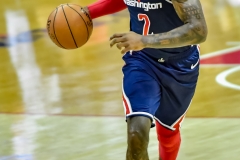 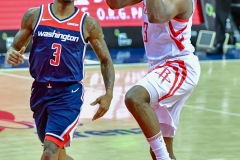 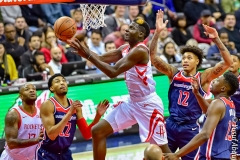 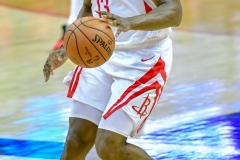 WASHINGTON — Given the disappointing start (to say the least) to the season for the Washington Wizards, one which has ramped up the rumor mill and has significantly increased the chances the core of the team will be broken up much sooner rather than later, seeing the team go down by 17 points after less than six minutes had elapsed on Monday night only made the end result that more surprising.

John Wall scored a season-high 36 points, including six in the overtime session, as Washington overcame another scoring explosion from James Harden to defeat the Houston Rockets 135-131, the Wizards’ second consecutive victory and third in their last four contests.

Things looked bleak after Washington allowed 42 first-quarter points, with Harden scoring 11 of those points for the Rockets, on their way to allowing Harden and backcourt mate Eric Gordon to score a combined 90 points in the contest — definitely not a recipe for victory for the Wizards.

“Absolutely not. No sir, not at all” said Wizards guard Bradley Beal after the game. “It’s amazing we pulled it off still.”

Washington’s escape act started in earnest in the second quarter, when it outscored Houston 37-23 and took a 67-65 lead into halftime. The teams battled to a stalemate through regulation after that and, in the overtime, Wall scored six of his 36 in overtime, including two consecutive jumpers to give Washington a 131-126 lead with 2:18 remaining. The Wizards did not trail at any point in the overtime.

Even with Chris Paul out with a leg injury for Houston, the battle of the backcourts still produced loads of fireworks, as Gordon complemented Harden’s scoring outburst with 36 points and eight three-pointers, while Beal tied a season-high with 32 points on 12-of-18 shooting.

“It’s what you dream of. It’s what you live for, to be on the big stage, a big moment, going against a guy like [Harden],” Wall said.

Markieff Morris provided a much-needed spark off the bench for Washington, going for 22 points and 10 rebounds.

Harden scored 44 of his 54 points through three quarters, but missed five of his seven field-goal attempts in the fourth quarter. Along with 13 assists, Harden also committed 11 turnovers, including three in the overtime session.

“It’s not even about myself,” Harden said. “It’s about our entire team. We had a really good start to the game and kind of let our guard down.”

Without Paul, Harden had extra responsibility to be a playmaker as well, playing in 47 of the 53 minutes tonight.

“I mean, we’re asking, especially James, you know what? Play 47 minutes, make every play,” said Rockets head coach Mike D’Antoni. “There are going to be periods where he’s just gassed.”

*Editor’s note: Above the byline is the photo gallery from Monday evening’s game, with all photos taken by DC-Area photographer Yusuf Abdullah. After clicking on the first photo to enlarge the picture, make sure to press the left and right arrow buttons to scroll through the rest of the pictures. There are currently nine pictures in total.