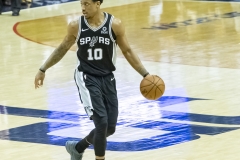 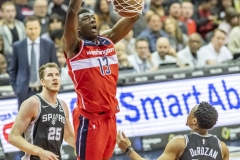 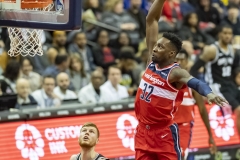 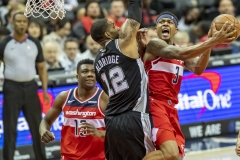 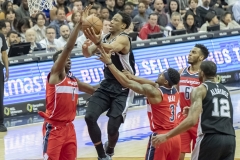 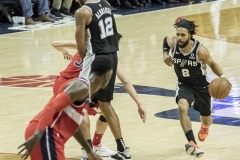 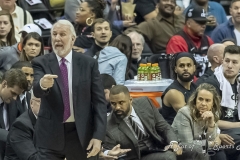 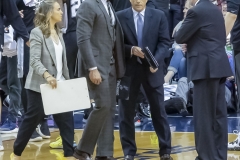 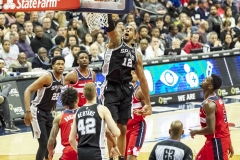 WASHINGTON — San Antonio Spurs head coach Gregg Popovich knows the importance of his teams’ last three games from an on-court perspective, preferably wanting his team to round into form, especially in away games, before the start of the 2019 NBA Playoffs. Whether he knows the importance of this final week from a historical perspective remains to be seen, but the man many in basketball circles knows as “Pop” can find himself on the mountaintop of the NBA head coaches pantheon, at least in one statistic, before the NBA’s second season start next weekend.

The Spurs snapped out of a funk on Friday in Washington, defeating the Wizards 129-112 to sop a run that had seen the team lost five out of eight to slip to the No. 8 position in the Western Conference standings. LaMarcus Aldridge scored 24 points to lead the Spurs while Rudy Gay added 18 off the bench.

The win also moved Popovich into a tie for second place for most combined wins (regular season and playoffs) by a head coach in NBA history, with his 1,410th win tonight tying his former boss, Don Nelson. Wins in the Spurs final two games would tie Popovich with Lenny Wilkens for first place all-time on that list.

As for tonight, the Spurs came out on fire, shooting 67 percent in the first half in taking a 77-58 lead at intermission. The 77 points were the most scored by the Spurs in a first half since Nov. 7, 1990.

“They’re on another level than us right now,” said Wizards head coach Scott Brooks. “We’ve got work to do. Nobody’s going to run from it.”

Guards Patty Mills and Bryn Forbes each scored 17 points for the Spurs while DeMar DeRozan added 16. The scoring outputs from DeRozan and Aldridge allowed each to surpass 1,600 points in a season, the first pair of Spurs teammates to do that in a season since David Robinson and Terry Cummings did so in 1989-1990 campaign.

The Spurs had lost three of four on the road coming into tonight, and, despite the win, will finish with the fewest road wins of any of the eight teams in the Western Conference that will make the postseason. San Antonio sports a 15-25 record away from the Alamo City, where they are 31-9.

“It’s a great win for us on top of the fact that it’s on the road,” said Gay. “We needed that. We’ve been a subpar road team this year.”

Bradley Beal led all scorers with 25 points for the Wizards, who must win one of their final two remaining games to avoid their first 50-loss campaign since 2012-13. Washington ends the season with a game in New York against the Knicks on Sunday before its finale at home against the Boston Celtics next Tuesday.

*Editor’s note: Above the byline is the photo gallery from Friday evening’s game, with all photos taken by DC-area photographer Yusuf Abdullah. After clicking on the first photo to enlarge the picture, make sure to press the left and right arrow buttons to scroll through the rest of the pictures. There are 10 pictures in total.