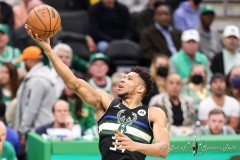 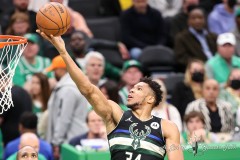 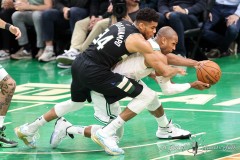 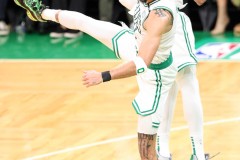 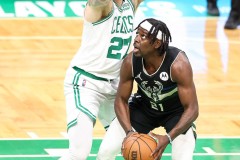 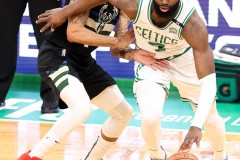 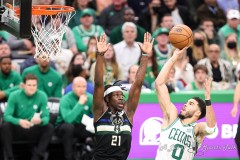 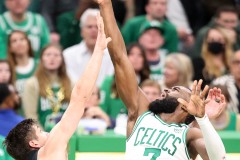 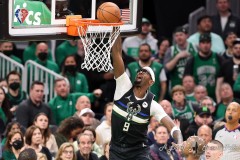 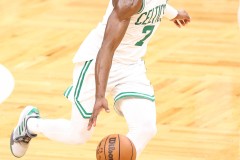 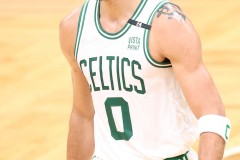 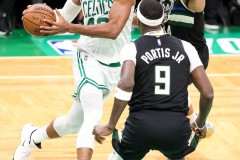 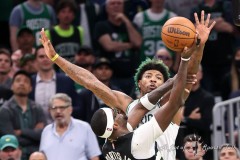 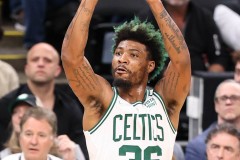 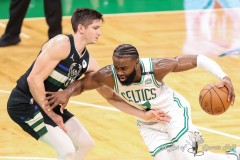 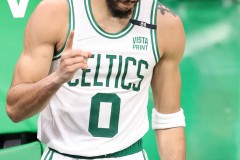 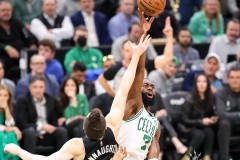 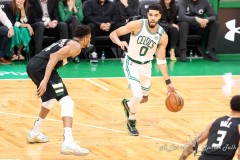 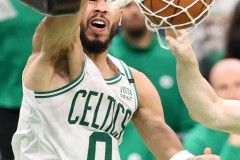 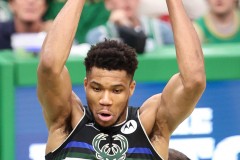 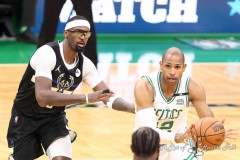 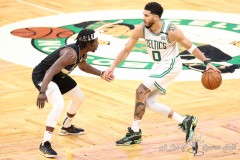 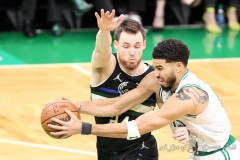 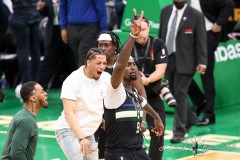 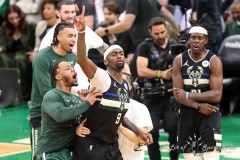 BOSTON — With 1:45 remaining in the most pivotal game of best-of-seven affairs, Game 5 of a series tied at two games apiece, the Boston Celtics had over a 90 percent chance to win the game and, in turn, set up two chances to defeat the reigning NBA champions. What predictive analysis cannot account for is championship heart, which the Milwaukee Bucks’ heart showed off in spades in the final two minutes, especially on the offensive glass, to snatch victory — and maybe the series overall — from the jaws of defeat.

Bobby Portis’s layup off an offensive rebound of a free throw miss with 11.4 seconds remaining gave Milwaukee its first lead of the second half, and Jrue Holiday’s block and steal in the final 10 seconds sealed the Bucks’ 110-107 road win over the Boston Celtics to take a 3-2 series lead. Giannis Antetokounmpo scored 40 points and grabbed 11 rebounds, and his three-pointer in the final frame sparked a game-ending 11-2 run that now has the Bucks one win away from reaching the Eastern Conference Finals for the third time in the past four seasons.

The Celtics’ Jayson Tatum, who scored 34 points, hit two free throws with 31 seconds left to give Boston 107-105 lead, and Antetokounmpo had the opportunity to level the score after he was fouled with 14 seconds remaining. The 2021 MVP made the first free throw but missed the second. However, Portis was able to take advantage of Celtics teammates Marcus Smart and Jaylen Brown running into each other in pursuit of the miss inside, and Portis grabbed the rebound and scored on a layup off the glass to give the Bucks a 1108-107 advantage. On the next possession, Holiday rotated over to block a layup attempt from Marcus Smart and, after retrieving the ball, threw the ball off of Smart before falling out of bounds to keep possession for Milwaukee.

Pat Connaughton added two free throws with six seconds to go before Holiday stole the ball from Smart at midcourt on Boston’s final possession to seal the win.

Milwaukee made up for allowing Celtics to shoot over 50 percent from the floor (42-of-82, 51.2 percent) by outrebounding Boston 49-36, including a whopping 17-5 advantage on the offensive glass. Seven of Milwaukee’s 17 offensive rebounds came in the fourth quarter alone, with five of those coming in the final 2:40 of the contest.

Boston entered the fourth quarter with a nine-point lead, 86-77, and extended it to 14 before the Milwaukee comeback, which became the Celtics’ largest lead to begin a fourth quarter that they blew in a playoff defeat in their illustrious franchise history. Al Horford’s tip dunk gave the Celtics a 105-99 lead with 2:12 remaining, and Portis’ missed jumper on the next possession could have been the death knell had the Celtics grabbed the rebound. However, Wesley Matthews raced to the top of the key to grab the offensive board and keep the possession alive, and his pass afterward was the assist to an Antetokounmpo three-pointer that cut Boston’s lead in half with 1:40 left.

Tatum missed a jumper on the ensuing possession, and although the Bucks missed two shots on the other end after Tatum’s miss, they tightened up their pressure defensively and Antetokounmpo came up with a steal of Marcus Smart which led to a transition three pointer from Holiday with 42 seconds left to tie the game at 105.

Milwaukee made all six of its three-pointers in the fourth quarter, with Holiday and Connaughton making two long balls each, while the Celtics did not attempt a three-pointer in the game’s final 12 minutes.

*Editor’s note: Above the byline is the photo gallery from Wednesday evening’s Game 5, with all photos taken by ALOST photographer Jenny Rohl. After clicking on the first photo to enlarge the picture, make sure to press the left and right arrow buttons to scroll through the rest of the pictures. There are 26 pictures in total.