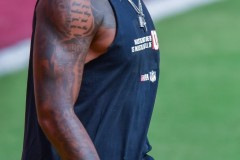 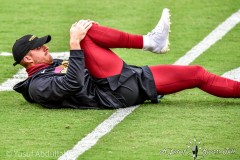 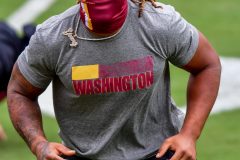 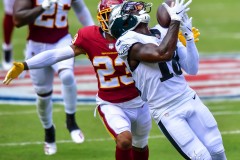 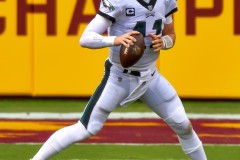 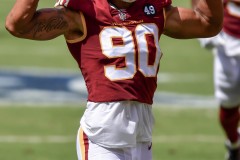 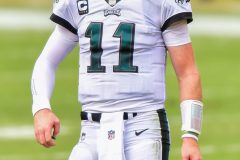 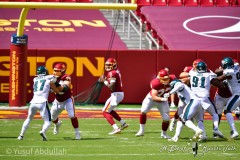 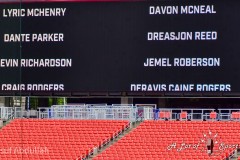 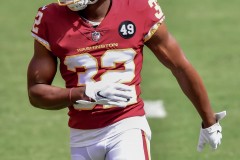 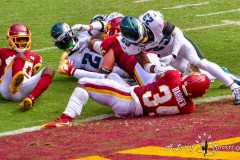 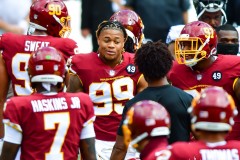 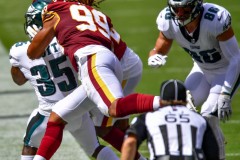 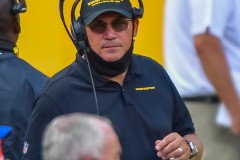 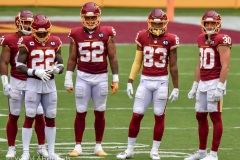 WASHINGTON — While the brand of the Washington Football Team and its offense searches for their new identities, the defensive effort it put together on Sunday may end up being its calling card for the new season, one which might be better than projected under their first-year head coach and defensive coordinator.

New Washington head coach Ron Rivera saw his new club dominate on the defensive end in the season opener, registering eight sacks of Philadelphia quarterback Carson Wentz as Washington defeated the Eagles 27-17 at a near-empty FedExField, the first game after the team dropped its longtime offensive nickname as part of a tumultuous offseason. Quarterback Dwayne Haskins threw for a touchdown and Peyton Barber ran for two scores as Washington came back from a 17-point deficit to end the game with 27 unanswered points.

Until the offense gets untracked, a unit whose 239 total yards in the game suggests that finding its footing might take a number of weeks, the Jack Del Rio-led defense harassed Wentz while taking advantage of an injury-depleted Eagles offensive line. Along with putting Wentz to the ground eight times for sacks, Washington also came up with two second-half interceptions, both of which were converted into touchdowns to spur the comeback.

Interceptions by Fabian Moreau late in the first half and Jimmy Moreland on the Eagles’ second drive of the second half turned the momentum around, with Haskins’ six-yard touchdown pass to tight end Logan Thomas with 40 seconds left in the second quarter getting Washington on the board, and Peyton Barber’s 1-yard plunge early in the third quarter cutting Philadelphia’s lead to 17-14.

Washington tied the game early in the fourth on a 40-yard field goal by Dustin Hopkins, a drive that began after a sack of Wentz by linebacker Jon Bostic on a fourth down near midfield.

Despite its struggles for most of the game, Washington’s offense came up with its best drive of the game during its game-winning score, running 13 plays and taking more than six minutes off the clock before Barber’s second touchdown run, a three-yard plunge, with 6:14 left gave Washington its first lead.

Philadelphia saw two of its projected starting five on the offensive line, left tackle Andre Dillard and right guard Brandon Brooks, suffer season-ending injuries earlier in the summer, and right tackle Lane Johnson was out today with an ankle injury, and their weaknesses up front showed as the game wore on. Wentz threw for two touchdowns, to Zach Ertz in the first quarter and fellow tight end Dallas Goedert in the second, and a Jake Elliott 38-yard field goal sandwiched in between late in the first allowed the Eagles to build their 17-point bulge.

*Editor’s note: Above the byline is the photo gallery from Sunday’s game, with all photos taken by DC-area photographer Yusuf Abdullah. After clicking on the first photo to enlarge the picture, make sure to press the left and right arrow buttons to scroll through the rest of the pictures. There are 16 pictures in total. Along with hoping that you enjoy the pictures, we encourage those of you who are serious about educating oneself and making a tangible difference in the fight against social injustice — but struggling to find a starting point — to click this link, an anti-racism resource guide for white people.