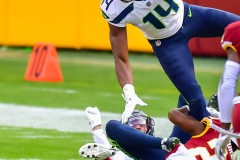 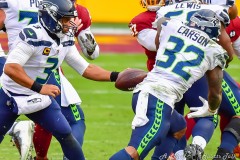 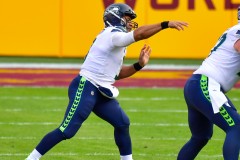 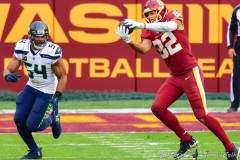 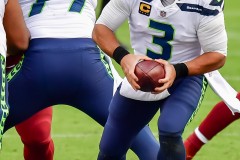 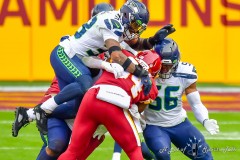 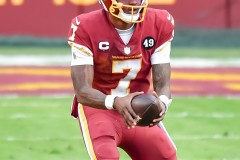 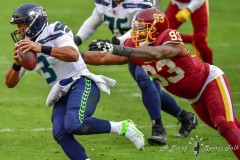 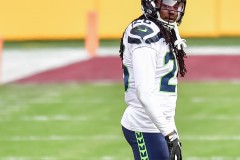 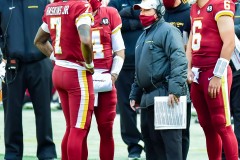 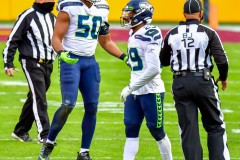 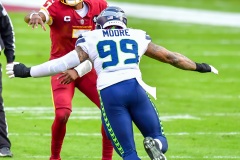 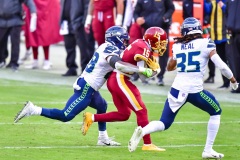 LANDOVER, Md. — Seattle Seahawks safety Jamal Adams continued his path straight towards the record books — though playing through parts of his body that are painfully crooked — as his team made sure it officially booked its reservation to another postseason appearance.

Adams, playing through two broken fingers, recorded a sack in extending his NFL record for sacks by a defensive back in a season, part of a stout defensive performance in the Seahawks’ 20-15 win over the Washington Football Team at FedExField on Sunday afternoon. Russell Wilson threw for 121 yards and a score while running for 52 yards as Seattle clinched its ninth trip to the postseason in the past 11 seasons.

Allowing just three points after three quarters, Seattle needed to thwart a late comeback attempt, coming up with sacks on consecutive plays to extinguish Washington’s final attempt at stealing a victory and give Adams, who was one of the few bright spots on a moribund New York Jets franchise before the traded him in the offseason, his first taste at playoff football.

“I know you guys are used to Seattle always going to the playoffs. I’m not used to this,” said Adams, who now has 9.5 sacks on the campaign. “I’m just excited. It feels good, man. This is what you dream of.”

The first three quarters went fairly swimmingly for the visitors, with Carlos Hyde’s 50-yard touchdown run early in the third quarter opening up Seattle’s biggest lead of 20-3. The Seahawks scored the game’s first 13 points, starting with Jason Myers’ 43-yard field goal in the first and his 40-yarder early in the second before Wilson fired a 10-yard touchdown to tight end Jacob Hollister just after the two-minute warning for the game’s first touchdown.

Washington, who had to turn back to Dwayne Haskins at quarterback after Alex Smith suffered a calf injury last weekend’s win in Arizona, struggled once more on offense to begin as it did not run a play in Seattle territory until midway through the second quarter. And a few plays after its initial foray past midfield, Haskins threw an interception inside the 10-yard line to Shaquill Griffin to end the momentum.

Just seconds before the end of the first half Dustin Hopkins kicked a 48-yard field goal to get Washington on the board and slice Seattle’s lead to 13-3 at the break, and it took them until late in the third quarter and into the fourth for its offense to come alive. Haskins engineered back-to-back touchdown drives, the first a 96-yard march that led to a Peyton Barber one-yard touchdown plunge that cut Washington’s deficit to 20-9 after Hopkins missed the extra point.

Washington’s defensive then came up big to end a promising drive, with a Wilson throwing an interception to Daron Payne after another defensive lineman, Montez Sweat, tipped the pass. From there, Washington marched 64 yards for another touchdown, with Haskins’ 6-yard toss to running back J.D. McKissic cutting the Seahawks’ lead to 20-15 with just over seven minutes remaining in regulation.

The inability to convert on two extra points — including a missed two-point conversion after McKissic’s score — came back to play a large role in Washington’s last drive, which went inside of Seattle’s 30-yard line with just over a minute left in the game. Instead of needing just a field goal to tie, Washington had to punch the ball into the end zone, and consecutive sacks on second and third down from L.J. Collier and Carlos Dunlap II effectively ended Washington’s last hopes to come away with what would have been a unexpected victory.

An unexpected victory in Los Angeles, by the Jets against the Rams, now gives Seattle a one-game lead in the NFC West with two games remaining, with the Seahawks and Rams squaring off in Seattle next week that could give the Seahawks the division title with a victory.

Washington remains a game ahead in the NFC East after the New York Giants’ defeat at home against the Cleveland Browns, though the Giants would hold a tiebreaker over Washington if it comes down to that by virtue of New York’s season sweep in the series. Washington will play its final home game of the season next week against head coach Ron Rivera’s old club, the Carolina Panthers.

*Editor’s note: Above the byline is the photo gallery from Sunday’s game, with all photos taken by DC-area photographer Yusuf Abdullah. After clicking on the first photo to enlarge the picture, make sure to press the left and right arrow buttons to scroll through the rest of the pictures. There are 13 pictures in total. Along with hoping that you enjoy the pictures, we are encouraging those of you who are serious about educating oneself and making a tangible difference in the fight against social injustice — but struggling to find a starting point — to click this link, an anti-racism resource guide for white people.