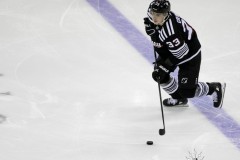 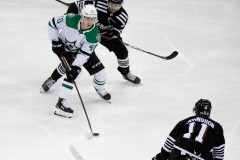 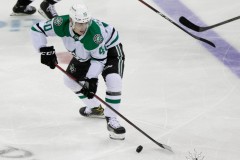 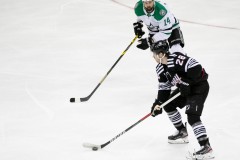 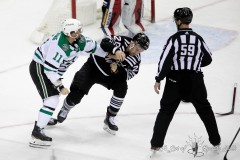 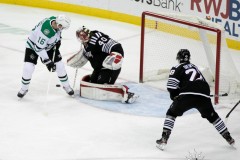 NEWARK, N.J. — Dallas Stars Joe Pavelski resumed his role as a personal boogeyman, helping his team continue one of the best streaks away from the Lone Star State in recent memory.

Pavelski’s two-goal first period, including a tally on first shift of the game just 14 seconds in, spearheaded the Stars’ 5-1 victory over the New Jersey Devils at the Prudential Center on Tuesday and completed a perfect four-game road trip for Dallas. Jacob Peterson scored in between Pavelski’s two goals as Dallas scored three goals on just seven shots in the first period.

Dallas scored at least three goals in each of the four games out East, including five goals in Buffalo and in Detroit to start off the trip before back-to-back wins in Philadelphia and Jersey.

The Stars top line of Pavelski, Robertson and center Roope Hintz are continuing to live up to the newly-minuted “Minutemen” nickname due to their quick impact at the beginnings of games, and it was Robertson’s pass from behind the net to Pavelski in the high slot that resulted in the first goal, with Pavelski pounding the one-timer past Devils goalkeeper Akira Schmid before many in the stands were settled in their seats.

Pavelski’s second goal came on a deflection from a point shot by defenseman Miro Heiskanen at 16:48 to give Dallas a 3-0 advantage. (Peterson scored at 9:45 to double the Stars’ lead) Pavelski now has a nine-game point streak against the Devils, and has scored a goal in each of his last seven contests against New Jersey (eight goals).

Dallas’ run of victories now sees it leap past Calgary for the second wild card spot in the Western Conference as they head into an advantageous part of their schedule; Friday will start a six-game home stand for the Stars, where Dallas has won 14 of its 19 games this season at American Airlines Center (14-4-1).

Jesper Bratt scored on the power play at 12:16 of the second period for New Jersey’s only goal, with Bratt now scoring in his third consecutive game (4 goals). New Jersey now goes on a three-game road trip where it will take on three of the Eastern Conference’s best: two-time defending Stanley Cup champion Tampa Bay, Carolina and Toronto.

*Editor’s note: Above the byline is the photo gallery from Tuesday’s game, with all photos taken by ALOST photographer Jenny Rohl. After clicking on the first photo to enlarge the picture, make sure to press the left and right arrow buttons to scroll through the rest of the pictures. There are XX pictures in total.