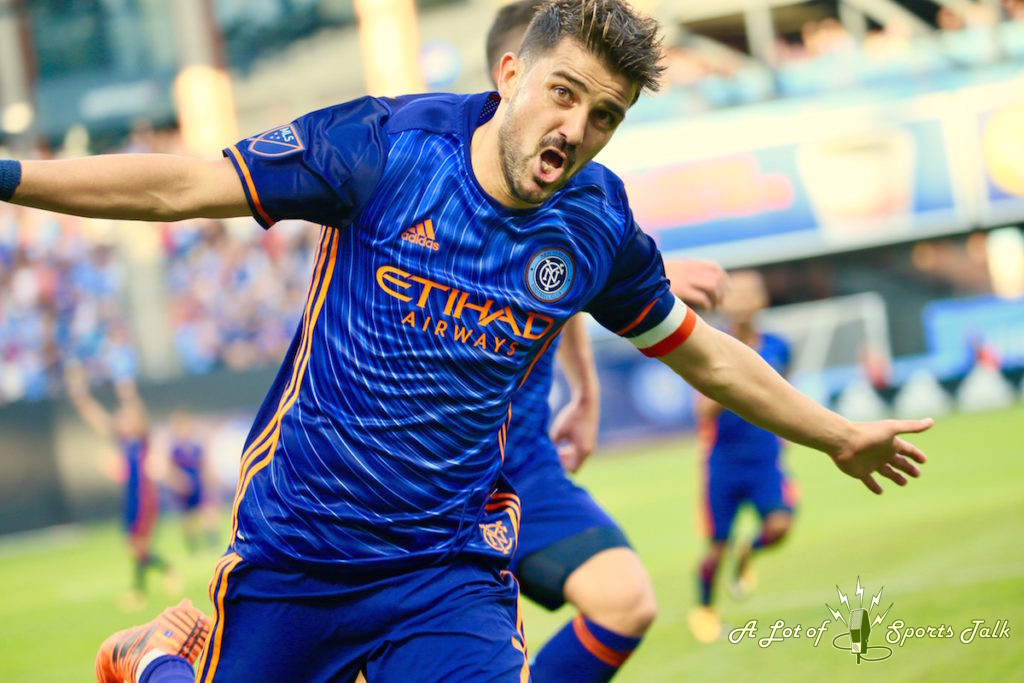 NYCFC forward David Villa celebrates after scoring a goal during the first half of a match against Columbus Crew SC at Citi Field in Queens, N.Y. on Oct. 22, 2017. (Robert Cole/ALOST)
0 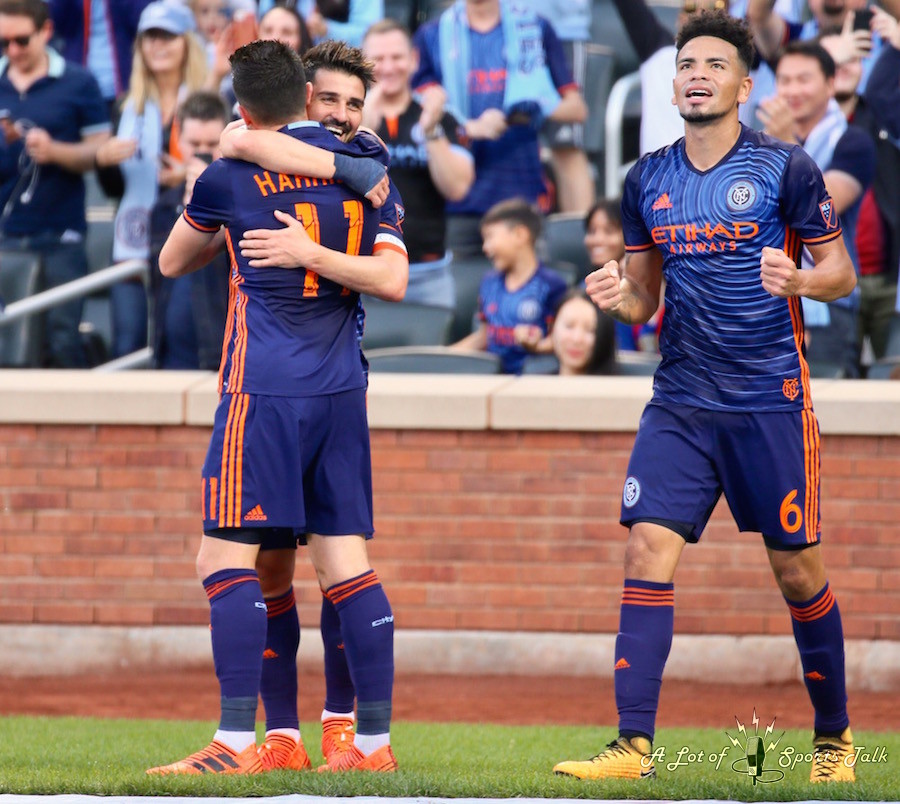 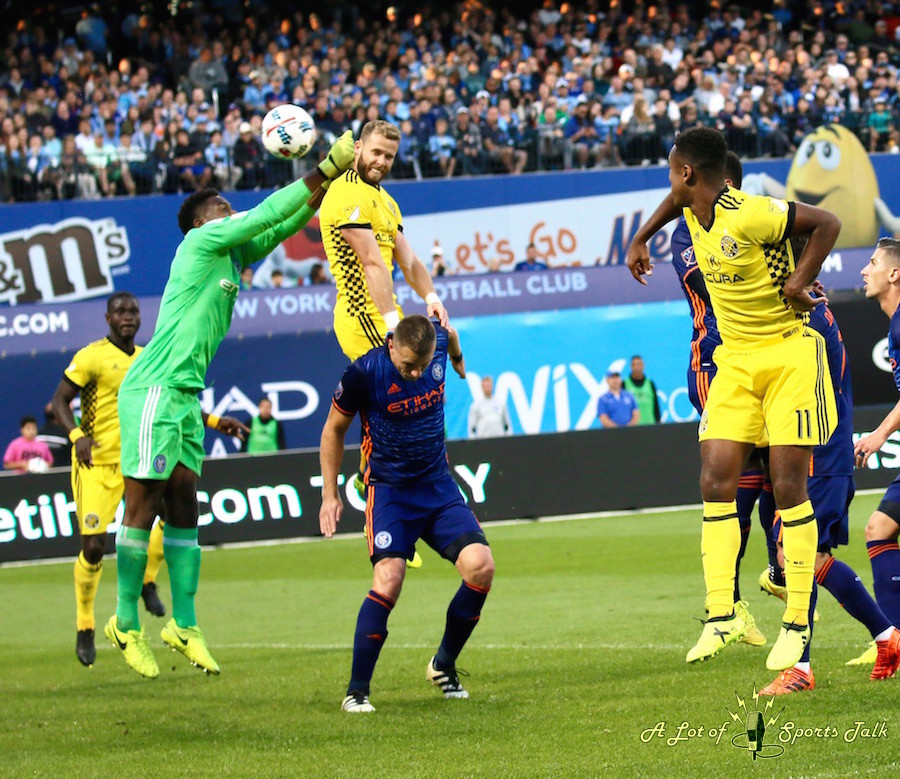 Columbus Crew SC defender Josh Williams (center, in air) heads a corner kick past NYCFC goalkeeper Sean Johnson (far left) and, eventually, into the net to tie the score during the second half of a Major League Soccer contest inside Citi Field in Queens, N.Y. on Oct. 22, 2017. (Robert Cole/ALOST)
0 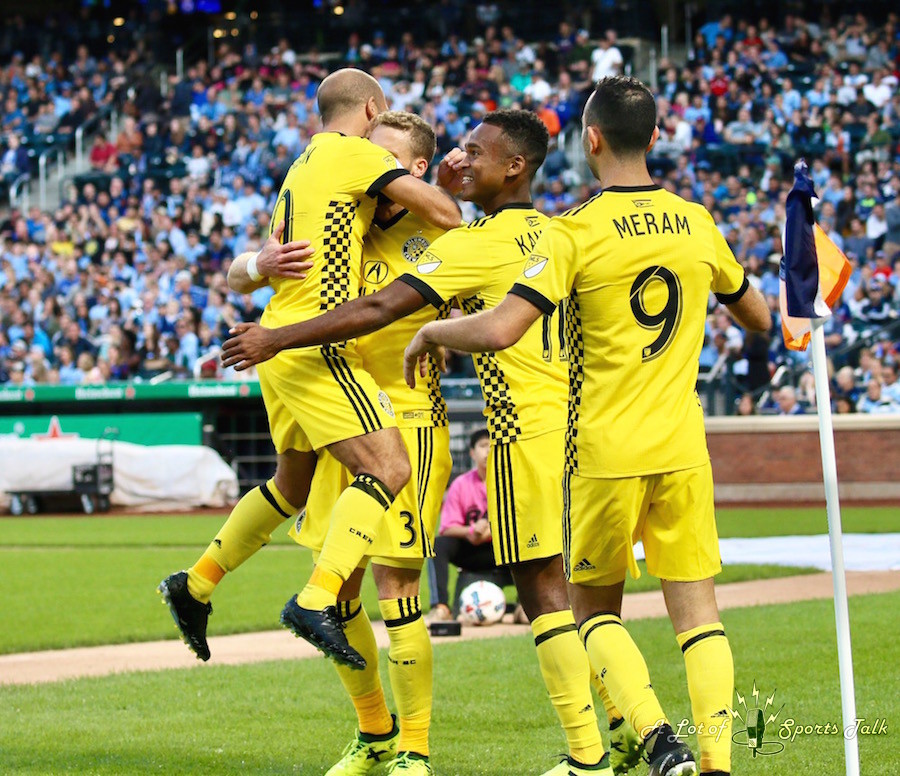 Members of Columbus Crew SC celebrate a goal scored by Josh Williams (3) during the second half of a game against NYCFC at Citi Field in Queens, N.Y. on Oct. 22, 2017. (Robert Cole/ALOST)
0
Load More

NEW YORK — Back in the mid 1970s, the New York Yankees had to temporarily call Shea Stadium home, the facility in which the New York Mets played their home games, as Yankee Stadium was being renovated. Those seasons spent at Shea, 1974 and 1975, served as building blocks to the Yankees teams that eventually won back-to-back World Series titles in 1977 and 1978.

New York City Football Club, who are co-tenants with the current iteration of the Bronx Bombers at the new Yankee Stadium, have now just experienced what it’s like to be displaced from the Bronx and have to play a pseudo home game in Queens, and at the home of the New York Mets. After today’s contest, they hope the same successes that immediately followed the Yankees in the 1970s is duplicated over four decades later as the 2017 MLS Playoffs start.

A first-half brace from David Villa was enough for NYCFC to clinch second place in the Eastern Conference and a first-round bye in the MLS Playoffs, as they finished the regular season with a 2-2 draw against Columbus Crew SC in a game played at Citi Field in Queens. Because of the New York Yankees’ success in the MLB Playoffs, today’s game, which had major playoff ramifications, was moved to the borough of Queens, possibly removing any home field advantage NYCFC might have enjoyed when playing in its normal environs.

Needing a win to ensure a first-round bye and not rely on Atlanta and Chicago to not earn maximum points in their games, NYCFC fell behind early to Columbus, whom themselves could have clinched a first-round bye if they had won and the results involving Atlanta and Chicago went their way. Midfielder Federico Higuain delicately chipped the ball into the box for striker Ola Kamara, whose left-footed effort beat NYCFC goalkeeper Sean Johnson to the far post to give the Crew a 1-0 lead in the 11th minute.

That goal came against the run of play, but NYCFC was level just seven minutes after they went down a goal. Villa outmuscled Crew midfielder Mohammed Abu in the box to meet a Maxi Moralez corner with his head, and that header rocketed past Crew goalkeeper Zack Steffen in the 18th minute to level the score at 1-1, sending the over 20,000-plus partisans into a frenzy and assured that Citi Field sounded and felt like Yankee Stadium to its opponents.

The rest of the half saw NYCFC create more chances, but also saw a bit of scoreboard watching mixed in, as Atlanta United was winning its game against Supporters’ Shield winners Toronto FC 1-0, giving Atlanta the edge over NYCFC for the second spot for the time being. In stepped Villa once more, as he unleashed a 25-yard drive with his right foot that hopped right in front, then over, a diving Steffen and into the net to give NYCFC its first lead right before the first half whistle.

Whatever breathing room NYCFC garnered after Villa’s second goal was quickly evaporated by Columbus early in the second half, with Higuain once again delivering a pass that led to a goal for the Crew. This time, off of a corner, Higuain found the head of center back Josh Williams, who headed past Johnson for his third goal of the season to level things at 2-2.

Just a few minutes after Columbus’ goal, Toronto FC had leveled in its match against Atlanta, and with Chicago being down 2-0 in its game at Houston, the next goal inside of Citi Field – if there was one – very well would have been the goal that lifted either team to second place in the Eastern Conference. New York was the more likely to score that decisive goal, and if it was not for the acrobatics of Steffen in goal, NYCFC would have come out on top. In the 75th minute, fellow striker Rodney Wallace played a cross into Villa in the box, and Villa met it first time with a mid-air, left-footed volley that Steffen lunged far to his left to make a diving save with his right hand.

In the 83rd minute, Villa once again tried his luck, this time with another laser from just outside the box, similar to the shot that beat Steffen late in the first half. Steffen was ready for it this time, and made a diving save once more. At around the same time as Steffen’s save, Sebastian Giovinco of Toronto FC scored on a free kick to level things at 2-2 in Atlanta, putting NYCFC back in the driver’s seat for second – and giving Columbus the impetus it needed to go for the winner, as it would have leaped it into second place at this point if it scored a winner of its own.

Steffen saved his best save for the very end, after New York City was awarded a penalty after a review of a takedown of Moralez in the box. Villa, looking for a hat trick. walked to the spot to take the kick, but Steffen dove low to his right to parry Villa’s attempt to safety.

When the final whistle sounded to put an end to the contest, both NYCFC fans and players looked up at the scoreboard, waiting for the final word from Atlanta. The celebrations started in earnest at Citi Field the second “full time” was flashed next to the “Atlanta 2-2 Toronto FC” scoreline, giving NYCFC the coveted first-round bye. New York will not have to take the pitch again until either Oct. 30 or Oct. 31, when it will play Leg 1 of its Eastern Conference semifinals matchup. Leg 2 will take place at Yankee Stadium on Nov. 5.

Columbus, the No. 5 seed in the Eastern Conference, will have to play on the road this coming Wednesday or Thursday against No. 4 Atlanta at the new Mercedes Benz Stadium.