NASHVILLE – John Wooden, almost inarguably the greatest head coach in American team sports, once talked about – and admired – the “purity” of women’s basketball; from the movement of the basketball to the alchemy needed from a quintet to put the ball in the basket consistently with the game being played below the rim. Given what unfolded in tonight’s women’s national championship game, the teamwork and fundamentals exhibited by the Connecticut Huskies on their way to a perfect season would surely have been the apple of the Wizard of Westwood’s basketball eyes.

UConn completed the eighth perfect season in Division I women’s basketball history with a near flawless display of selflessness on the biggest stage, defeating the previously unbeaten Notre Dame Fighting Irish 79-58 in the much-anticipated matchup of unbeatens at the Bridgestone Arena. Of the 34 shots the Huskies made in the contest, 25 came off of assists, setting a national championship game record for helpers in the process.

“Well, there really isn’t much that you can say when we have a performance like that where your players are just really locked into what we wanted to do and how we wanted to do it,” said Geno Auriemma, his nine titles only trailing Wooden’s 10 trophies for the most by a head coach in D-I.

From the outset, not only was UConn set on moving the Fighting Irish defense around, but also to pound them inside, especially given the absence of Irish senior forward Natalie Achonwa, missing her second consecutive game after her season-ending knee injury suffered last Monday. Connecticut’s twin towers – the spindly sophomore Breanna Stewart, the Final Four’s Most Outstanding Player, and the space-eating senior Stefanie Dolson – dominated inside from the start, combining to score 18 of the teams first 22 points as the Huskies raced out to a 22-8 lead. Three of their baskets during that stretch came off of assists from the other, as Dolson routinely found Stewart cutting to the basket with Stewart and the rest of her teammates feeding Dolson inside in a good position on the low block when she decided to be more aggressive offensively.

“Right from the beginning of the game we went in, took advantage of the size we had against them,” said Dolson, who along with guard Bria Hartley, closed out her Connecticut career with a second national championship. “And right when we realized what an advantage we had, we just kept kind of pushing it at them, and we never really backed down.”

To Notre Dame’s credit, they didn’t back down themselves despite the early onslaught. But then again, that’s what teams that are perfect do, like the Fighting Irish were before tonight. Like in their national semifinal win over Maryland with Markisha Wright’s near double-double, Notre Dame got a huge boost from a member of its bench, this time in the form of guard Michaela Mabrey. The sharpshooting sophomore scored 10 first-half points, including two threes, the second of which cutting the Huskies’ lead to 37-30 with 3:27 to go. Though the lead grew back to 10, a jumper by senior Kayla McBride and a three-pointer by dynamic sophomore Jewell Loyd cut that lead in half, 43-38, with 27 seconds left, bringing the green-clad Irish faithful into a full roar for the first time since the introduction of the starting lineups.

The end of the half not only followed most of the theme of the first half, but proved to be the catalyst in UConn’s game-deciding run. Dolson missed a jumper with five seconds left, and although three Irish players were inside with a chance to grab the rebound, Kaleena Mosqueda-Lewis slithered her way inside to grab the carom and stick it back through the hoop right at the buzzer for a 45-38 halftime edge.

“We made our run when they went to the bench,” said Notre Dame head coach Muffet McGraw, who dropped to 1-3 in national championship games. “We went to the triangle and two. It was very effective. We made some shots. I think we got into a little bit of a rhythm on our own.”

Whatever rhythm Notre Dame had began to ebb with the end-of-half score by UConn, then was completely eroded by the 18-4 spurt the Huskies starting five had to begin the second half. Once again, most of the baskets came inside, including a Dolson three-point play to put them up 59-42 less than six minutes into the second half. Halfway through, the lead was 20, and the game was effectively over.

McGraw likened Connecticut’s level of play tonight to another team that a lot of basketball teams have had trouble slowing down in recent times.

“I thought we were playing the Miami Heat for a while,” McGraw continued when asked what she said to Auriemma at the post-game handshake. “I thought they were just missing LeBron.”

For the game, Connecticut scored 52 points in the paint and out-rebounded the Fighting Irish 54-31.

Connecticut’s two seniors, Hartley and Dolson, began their careers helping UConn win their 79th game in a row, a streak that would eventually reach 90 in a row and eclipse the hallowed mark of UCLA’s 88-game win streak under Wooden. Now they end their careers helping Auriemma come one title shy of tying him for most NCAA titles, and his appreciation for the two was clearly evident when they both left the game with a minute left and shared hugs with the coach.

Despite all the championships, Auriemma, just like Wooden when he described success as peace of mind that you did your best to become the best that you are capable of becoming, is most proud of the effort his teams consistently give, regardless of hardware.

“We try to do the right thing for the people that are there,” Auriemma said. “If it means winning a national championship, great. As you start to look back, you see them sitting there, you’re just more proud of the legacy that exists of what is Connecticut basketball as opposed to the number of championships.” 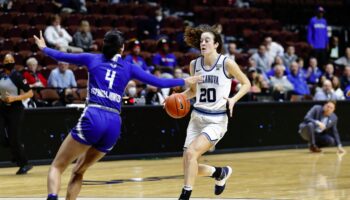 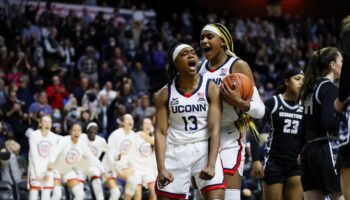 Second to None Once More? (2022 Big East Women’s Tournament Quarterfinals) 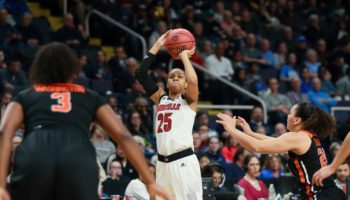