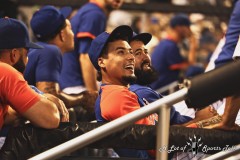 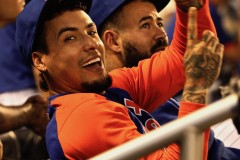 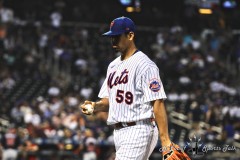 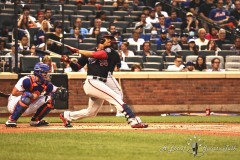 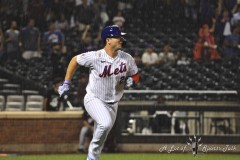 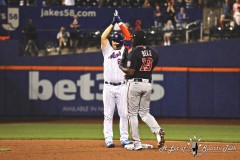 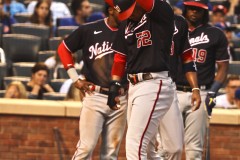 NEW YORK — In a season cursed by a series of washouts and postponements, the New York Mets latest game interrupted by rain turned out to be one of their biggest blessings of the campaign.

Brandon Drury came through again in a pinch-hitting role with a bloop single to drive in the go-ahead run in the eighth inning as New York scored three runs in the final two times at-bat in defeating the Washington Nationals 8-7 in a game that resumed on Wednesday after being suspended by rain after the first inning last night. Pete Alonso had three hits, including a home run before the weather delay, in helping New York snap a four-game losing streak.

The Nationals held three-run leads on two occasions in the contest, and were up 7-4 in the bottom of the seventh when Alonso lined a double high off the left-centerfield wall to score Brandon Nimmo to cut the lead to 7-5. One inning later, J.D. Davis began the inning by lining a double to right off reliever Mason Thompson. Jonathan Villar followed with a sacrifice bunt back to the pitcher, but Thompson’s errant throw to first and down the right field line allowed Davis to score the tying run. Two batters later, Drury, who came into the game batting .450 (9-for-20) as a pinch-hitter this season, fought off a pitch to loop a ball over the drawn-in infield to give New York its first lead at any point in game since last Wednesday in Miami.

Before the Mets incurred their 12th rainout of the season on Tuesday, Washington jumped all over starter Carlos Carrasco in the first, with Victor Robles and Alcides Escobar producing back-to-back singles immediately preceding Juan Soto’s 19th home run of the season for a 3-0 lead before the first out of the game was recorded Soto had two more hits in the game’s resumption.

*Editor’s note: Above the byline is the photo gallery from Saturday evening’s contest, with photographs taken by ALOST photographer Chris Simon. After clicking on the first photo to enlarge the picture, make sure to press the left and right arrow buttons to scroll through the rest of the pictures. There are seven pictures in total.