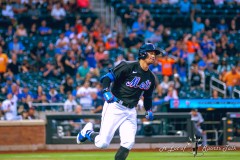 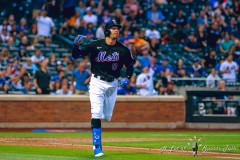 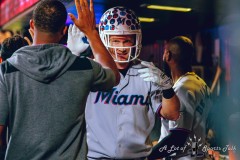 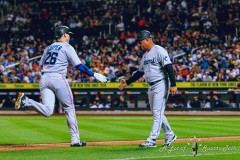 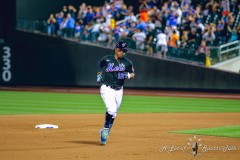 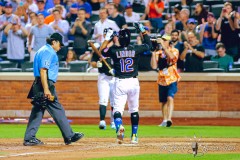 NEW YORK — Holding onto the slimmest of leads late in the game on Friday night, the Miami Marlins had arguably their best hitter at the plate to try and add some insurance, albeit a hitter who had found the sledding rough in the batter’s box to start his series in the Big Apple. One swing and one foul pole later, Cooper found himself back on track and the Marlins found themselves back in the win column.

Cooper slammed a two-run home run off the right field foul pole in the seventh inning, the decisive blow in Miami’s 5-2 victory over the New York Mets at Citi Field on Friday. Bryan De La Cruz hit three doubles in a 3-for-3 evening for the Marlins as they ended a two-game losing streak.

Cooper, coming into the beginning of series on Thursday ranking fifth in the National League with a .311 batting average, was overmatched in almost two full games so far in Queens, hitless in his first six at-bats with half of those appearances resulting in strikeouts. The Marlins were holding on to a 2-1 lead in the eighth with Jon Berti on first when Cooper cranked a hanging slider from Mets reliever Drew Smith deep down the right field line, eventually clanging off the foul pole for his seventh home run of the season and a 4-1 Miami lead.

De La Cruz’s batting average has steadily been about 100 points lower than Cooper’s all season long, but has been a terror against the Mets and starter Chris Bassitt, and De La Cruz’s three doubles continuing in that vain this evening. His first double came with two runners on in the second, a scorching line drive that went just over the glove of left fielder Mark Canha to score Jesús Aguilar to open the scoring. De La Cruz opened the fifth with a double to right, then moved two third base on a Miguel Rojas single. Two batters later, Joey Wendle hit a sacrifice fly to right to score De La Cruz to break a 1-1 tie.

De La Cruz is now 5-for-7 with four extra base hits against Bassitt, and now has hit safely in 10 of his last 14 starts.

New York’s only two runs of the game came on solo home runs, by Brandon Nimmo in the third inning to tie the game and a Francisco Lindor shot from the right side of the plate in the bottom of the eighth to cut New York’s deficit to 4-2. New York eventually loaded the bases in the eighth when Jeff McNeil was hit by a pitch and then back-to-back walks were issued to Mark Canha and pinch-hitter J.D. Davis. Reliever Steven Okert was able to pitch out of trouble, getting Eduardo Escobar to fly out to center to get out of the bases loaded jam.

*Editor’s note: Above the byline is the photo gallery from Friday evening’s contest, with photos taken by ALOST photographer Roberto Carlo. After clicking on the first photo to enlarge the picture, make sure to press the left and right arrow buttons to scroll through the rest of the pictures. There are six pictures in total.