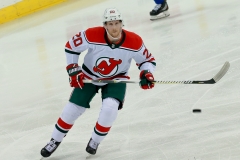 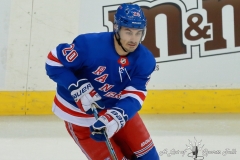 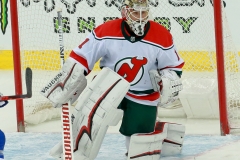 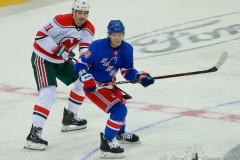 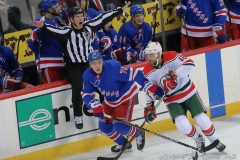 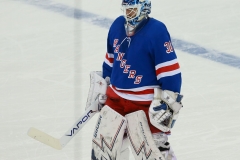 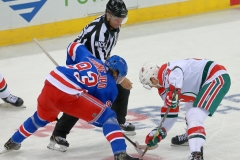 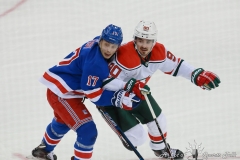 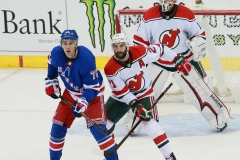 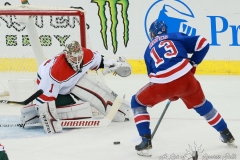 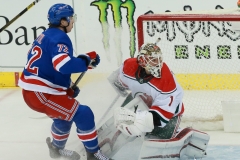 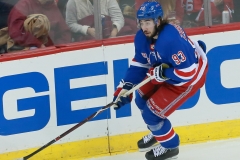 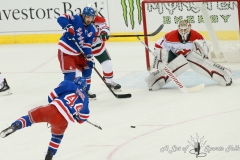 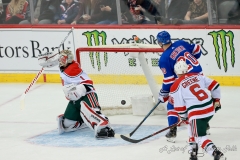 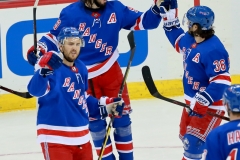 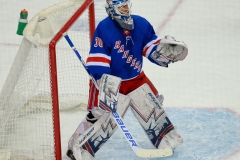 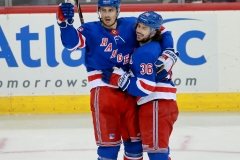 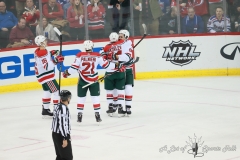 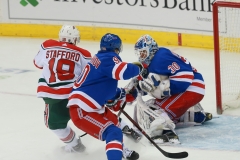 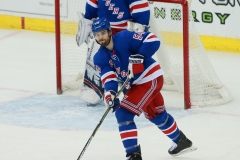 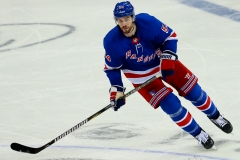 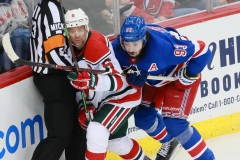 NEWARK, N.J. — The New York Rangers’ top line of Chris Kreider, Mika Zibanejad and Mats Zuccarello continue to prove that three is indeed a magic number, and the three goals that the center of the line scored on Thursday continued the Blueshirts’ push towards playoff contention.

Zibanejad scored his second-career hat trick, including the game-winning goal off of a feed from Zuccarello with 4:36 remaining in the third as the Rangers came back from a two-goal deficit to defeat the New Jersey Devils 4-3 at the Prudential Center, New York’s fourth win in its last five games.

Along with the hat trick, Zibanejad also had an assist for a four-point night, Zuccarello had three assists and Kreider scored a third-period goal that gave the Rangers their first lead of the evening.

“We’re trying to use each other out there as much as possible,” said Zibanejad, who has scored eight goals in his last five games. “Trying to use the things we’re good at and trying to implement that in our game. It’s just clicking for us right now and it’s good seeing [Zuccarello] back and we’re super happy obviously. As a whole line, [Kreider] is doing so much with his skating.”

The line was not whole on Tuesday during a 1-0 loss in Philadelphia, as Zuccarello sat out with a foot injury. In the last six games in which each of the three players were in the lineup, the trio has combined for 31 points (15 goals, 16 assists). Zibanejad also scored a power play goal at 16:36 of the second to tie the game at 2-2.

“We talked about how when goals come, they come in flurries and they’re coming at a snowstorm rate for [Zibanejad] right now, which is good for us,” Rangers head coach David Quinn said. “The way Kreids and Zuc are playing, that line has been dominant.”

New Jersey jumped out in front on its crosstown rivals with two power play goals in the first period, one from Nico Hischier and the other from Marcus Johansson, to take control early. The momentum shift seemed to occur with 1.8 seconds left in the first period when, on the power play, the Rangers got on the board as a Kevin Hayes’ shot from just inside the blue line was deflected in front by Zibanejad past the legs of New Jersey goalkeeper Keith Kinkaid to cut New York’s deficit in half.

New York now moves to 51 points on the season, eight points behind the Columbus Blue Jackets for the final Wild Card spot.

“We can’t look too much at the standings right now,” said Rangers goalkeeper Henrik Lundqvist, who made 19 saves in the win. “We have to take every game as an opportunity to get better and we will see where we are at the end.”

*Editor’s note: Above the byline is the photo gallery from Thursday evening’s game, with all photos taken by A Lot of Sports Talk senior photographer Robert Cole. After clicking on the first photo to enlarge the picture, make sure to press the left and right arrow buttons to scroll through the rest of the pictures. There are 22 pictures in total.