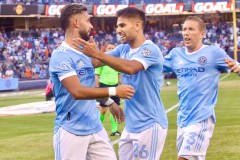 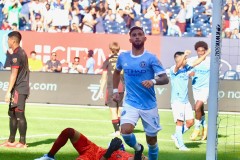 NEW YORK — Soon after New York City FC felt that a long-awaited win was within their grasp, they were left with a bitter taste at the end of their latest contest — and left without a league win for almost two whole months.

Dom Dwyer came off the bench to tally in the 86th minute for Atlanta United FC as it got a point from their travels to the NYC area this week after a 2-2 draw against New York City FC on Sunday afternoon at Yankee Stadium. Leading scorer Josef Martinez also scored for Atlanta in the second half as the Five Stripes came back from a goal deficit twice, with both New York City goals coming from Valentin Castellanos.

*Editor’s note: Above the byline is the photo gallery from Sunday afternoon’s game, with all photos taken by ALOST senior photographer Robert Cole. After clicking on the first photo to enlarge the picture, make sure to press the left and right arrow buttons to scroll through the rest of the pictures. There are two pictures in total.